Scotland’s Yes campaign nudges ahead in the polls

Analysis: Often the debate descended into a shouting match, particularly over the NHS 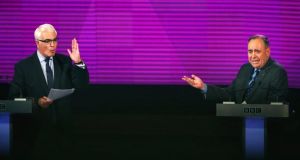 Alex Salmond lost the first TV debate earlier this month by a country mile, yet the Yes side in Scotland’s independence referendum campaign nudged a little forward in later opinion polls.

Last night, he decisively beat former Labour Chancellor of the Exchequer Alistair Darling in a snap poll conducted by The Guardian gave it to the Scottish National Party leader by 71 points to 29.

The question is what, if any difference it will make with little more than three weeks out has Mr Salmond done enough to turn around two years of polling figures.

He was loudly cheered by many in the specially-selected audience for the BBC-hosted debate in Glasgow, though in truth it often sounded distinctly weighted in favour of the Yes side.

Mr Salmond has unashamedly played the Scottish card, saying that he would win a currency union with the rest of the UK because he would enter such talks “carrying the sovereign mandate of the Scottish people”.

The rhetoric sounds good- certainly a thousand times better than he performed in the first TV debate- but it makes no allowance for the fact that that deal has been repeatedly rejected.

The Conservatives have said it cannot happen, Labour has said that it would not happen, so too have the Liberal Democrats, yet a majority of Scots believe that they are bluffing.

Questioned, the three British-wide parties - who are reluctant partners in the Better Together campaign, which are seeking to defeat the September 18th referendum- insisted that there will be no change of heart.

In the first debate, Mr Salmond refused to offer Darling “a Plan B” if an independent Scotland’s demand for a currency union was rejected by the outstanding parts of the UK.

Last night, he was generous with his offer, saying he had “three Plan Bs” that included a flexible currency, a currency fixed to the pound and unilateral use of the pound.

Scotland could not be stopped using the pound, he said, which is true though Mr Darling pointed out that that meant life without a central bank behind the Scottish economy.

Frequently, the debate descended into a shouting match, leading to fears the undecided voters both sides need to win over in the remaining weeks had switched off.

The two particularly clashed over the NHS. It was mentioned once in the first debate, but Yes Scotland has raised fears since then that it faces imminent threat from London.

The Yes campaign has thrown Better Together off-balance, who have pointed out that the Scottish parliament has been in charge of the NHS for 15 years, but this is not fully understood by Scottish voters.

Charges that it is under threat are a lie, insisted Mr Darling, who added charges operations had been cancelled in an English hospital because of privatisation has also been shown to be a lie.

Mr Salmond will increasingly play on Scots emotions in coming weeks, judging by the language he used in his opening and closing remarks in the 90-minute debate.

“Twice before in Scotland’s recent history we’ve stood at the crossroads,” the SNP leader said, as he began his opening statement in the famous Kelvingrove Art Gallery.

“In 1979, we didn’t get the Parliament we voted for but instead got 18 years of Tory government - Margaret Thatcher, the deindustrialisation of Scotland, the poll tax,” he said.

“In 1997, we took our opportunity and since the Parliament came to Scotland life has got better. We introduced free personal care for the elderly, we removed tuition fees.

Mr Darling frequently struggled to cope with the aggressive style of Mr Salmond, who had adopted a more emollient style in the first TV debate saying it was the way to win over undecided voters.

Last night, he abandoned that practice, preferring the more confrontational display that Scottish voters have become used to over the last decade.

The question is whether they liked it.