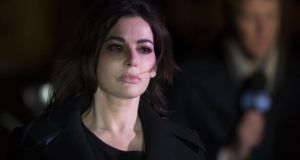 Multi-millionaire Charles Saatchi has been accused of using the trial of his two former personal assistants to attack his ex-wife Nigella Lawson.

Francesca Grillo, 35, and her sister Elisabetta, 41, are alleged to have spent £685,000 on credit cards belonging to the TV cook and her art dealer ex-husband, who were divorced in July.

Anthony Metzer QC, defence counsel for Elisabetta, said she had been caught up in the “crossfire” between the former couple.

He asked the jury at Isleworth Crown Court, west London: “Could it be Mr Saatchi was using this as a way to attack Ms Lawson by proxy? By turning on one of her most trusted and loved people?”

He added: “As his relationship with Ms Lawson started to unravel and he lost control of her, he looked for a place to put his hurt and anger. The extravagant way Ms Lawson kept her family in his money was now a legitimate place for him to exert his feelings.”

Mr Metzer asked why Mr Saatchi did not carry out a full investigation into all of his staff after the fraud allegations came to light. “He knew Lisa (Elisabetta) was a soft underbelly for attacking Ms Lawson,” he said. She was “caught in collateral cross-fire” between Mr Saatchi and Ms Lawson, like the child of divorcing parents.

The sisters have told the court they saw evidence that Ms Lawson used drugs on a regular basis.

Francesca told the jury yesterday she would “frequently” find rolled-up banknotes with white powder on them in handbags belonging to the food writer. In her evidence to the court, Ms Lawson said she was not a regular drug user.

She said she used cocaine on only one occasion following the death of her first husband John Diamond, and also that she had taken it on a small number of occasions with him.

Mr Metzer asked if that was “credible”, given the addictive nature of drugs. He claimed Ms Lawson “carefully honed” her evidence and gave a “rehearsed speech”. He said: “In reality, what choice did she have? She faced compelling evidence from many sources of sustained drug use over the past 10 years.”

Mr Metzer said Ms Lawson’s evidence on her drug use should be taken “with caution”.

“It came from a woman who found herself between a rock and a hard place — excuse the pun,” he said. He said there was evidence that the drug use was a “guilty secret” that had been kept from Mr Saatchi and it was a “central plank” of the defence case.

This is because Ms Lawson was meant to take responsibility for spending on the credit cards and had failed to do so, or had given authorisation while under the influence of drugs, the court heard.

Mr Metzer told the jury: “Your verdict is inevitably going to be of significance to Ms Lawson and her public image.”

The court was also told during Mr Metzer’s closing speech: “This is a case with no winners. Not Mr Saatchi, not Ms Lawson and certainly not my client, who is alleged to have breached the trust placed in her by a family she loved and still loves.”

The court heard the siblings are alleged to have bought designer clothes, shoes and luxury holidays on the cards.