Freefall devil saved by team-mate who caught him mid-air

A British army paratrooper from the Red Devils display team had a narrow escape in front of hundreds of spectators after he was caught mid-air by a fellow team member when his parachute failed to open properly. Video: Ricky Parn/ Reuters 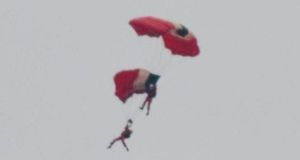 Members of the British Army freefall parachute display team, the ‘Red Devils’ who were performing at the Whitehaven Air Show on the Cumbrian coast last night, when a team members chute failed to open - leaving a team-mate to catch him in mid-air and bring him to safety. Photograph: PA 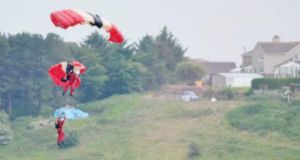 A Red Devil parachutist had a lucky escape after his chute failed to open during an airshow – leaving a team-mate to catch him in mid-air and bring him to safety.

An Army spokesman said: “We can confirm that there was an incident during the Whitehaven Air Show, when a member of the Red Devils display team’s parachute failed to open correctly.

“A team mate assisted in his safe landing, both men were unharmed, and we are now investigating to find out the cause of the incident.”

The British Army freefall parachute display team was performing at the Whitehaven Air Show on the Cumbrian coast last night when the device failed to open.

Footage and pictures circulating on social media showed the soldier coming down attached to a team-mate with a working parachute before landing in the water.

A message was later posted on the show’s Facebook page, saying: “We can confirm that the Red Devil parachutists are both safe and sound. For the first time in 25 years they had a parachute fail.

“One team member caught his team-mate and brought him into Queens Dock. Our safety procedures worked perfectly and a huge thank you to Whitehaven Marina for getting them out of the water so quickly.”

People at the air show, which also included the Red Arrows, praised the actions of the men on the Facebook page.

Sarah David wrote: “Glad to hear both are ok, was awful watching them struggling, especially when they veered off course — until we realised they were purposely targeting the biggest area of water for ditching in to.”

Melanie Ryden added: “We felt sick watching them tangled together and falling so fast. So relieved they landed in the water and were unhurt. Well done guys.”

The Red Devils formed in 1963 and carries out more than 60 displays every year, according to its website.

It currently comprises of 12 serving soldiers from the three battalions of the Parachute Regiment, all of whom have to have at least three years experience.