‘Breaking Point’ advert has been reported to police for alleged racsim 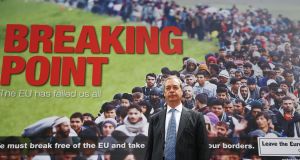 British Chancellor George Osborne has branded a controversial poster unveiled by Ukip leader Nigel Farage as “vile”, comparing it to extremist literature produced in the 1930s.

Speaking on ITV1’s Peston on Sunday, Mr Osborne said that the poster was the latest in a series of efforts by Mr Farage to “whip up division”, also including “baseless” claims that millions of migrants were likely to arrive from Turkey.

The poster, showing a stream of non-white migrants walking through the countryside under the slogan “Breaking Point” has been reported to police for alleged racism, and some on social media have compared it to images from the Nazi era.

But Mr Farage has dismissed suggestions that the poster was racist, insisting it was an “accurate, undoctored” picture of the consequences of German Chancellor Angela Merkel’s announcement that she was opening the doors to refugees from the Syrian war.

Mr Farage rejected claims that he was stoking up hatred, complaining that he was the one who was being targeted. “I think I have been a politician who has been a victim of it,” he said. “When you challenge the establishment in this country, they come after you, they call you all sorts of things.”

The Chancellor said: “There are perfectly legitimate concerns about migration, concerns that are felt in every Western democracy in the world.

“But I think there is a difference between addressing those concerns in a reasonable way and whipping up concerns, whipping up division, making baseless assertions that millions of people are going to come into the country in the next couple of years from Turkey, saying that dead bodies are going to wash up on the beaches of Kent, or indeed putting up that disgusting and vile poster that Nigel Farage did, which had echoes of literature used in the 1930s.

“That is what we should say ‘No’ to. This referendum vote is a vote on the kind of Britain we want.

“Do we want a prosperous outward-looking Britain that’s leading in Europe or do we want a meaner, narrower Britain that is poorer in all senses of the word?”

Justice Secretary Michael Gove, one of the leaders of the official Vote Leave campaign, also distanced himself from the poster.

However, he defended a warning by Vote Leave that there could be an additional one million immigrants from Turkey within eight years if Britain remains in the EU, even though the Government has insisted it will be many years before Turkey will be able to join.

“The rate and speed at which Turkey will join will depend on a variety of political factors but it is the case that during the course of this year that the European Union have made it clear that they want to accelerate that process,” he said. “I think that when Turkey is becoming less democratic that is not the right thing to do.”

Scotland’s First Minister Nicola Sturgeon called for the poster to be withdrawn, describing it as “vile and racist”.

Speaking on the Murnaghan programme on Sky News, she said: “In these last few days I hope we can have a debate that doesn’t focus on immigration.

“On that point, the poster that Nigel Farage unveiled last week was vile and racist...and I hope he does agree today to withdraw that poster, because that kind of sentiment has no place in a civilised debate.”