It’s a dirty job, but do Thames authorities have to do it? 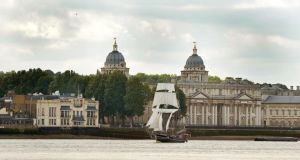 Cholera-plagued London was forced during Victorian times finally to tackle the flood of sewage that daily polluted the Thames. Photograph: John Stillwell/PA

Somerset House on London’s Victoria Embankment has a wonderful terrace, supported by a series of bridges underneath, along with an arch once built to welcome the King’s Barge Master, looking every bit a building that should have a clear view over water.

It once did, and, if history had worked out differently, it still would; bar the reality that cholera-plagued London was forced during Victorian times finally to tackle the flood of sewage that daily polluted the Thames.

Today, Somerset House is separated from the Thames by pavements, but, more importantly, a four-lane highway, leaving the quadrangle of buildings, which once housed the Admiralty, literally “high and dry”.

Underneath the road lies the work of Joseph Bazalgette, the Victorian engineer whose work so impressed the Houses of Parliament – members of which had found it impossible to occupy their quarters further up the river – that he received a £6,000 bonus.

One of the keys to
Bazalgette’s design, which captures rain-water along with sewage and was designed to cope with four million people, is a system of nearly 60 overflows spread along its route that pour directly into the Thames in emergencies.

The logic was sensible in the 1850s, because the alternative – that the sewage should back up and flood Londoners’ homes – was unacceptable, undoing many of the health gains that were made from falling cholera figures after it opened.

Raw sewage
Today, however, emergency has been the norm.

Lord Chris Smith of the Environment Agency points out: “The current situation is unacceptable, with 39 cubic metres of raw sewage mixed with surface water run-off discharged in an average year.

“In wetter years, the figure can increase threefold. These discharges occur, on average, once a week – up to 60 times a year – and after as little as 2mm of rain,” says Smith, who argues that the super-sewer is not a choice, but rather a necessity.

Without action, the UK faces the threat of Brussels fines, following a judgment last year by the European Court which warned that neither practical nor administrative difficulties, nor indeed cost, justified the pumping of raw sewage into rivers.

A preliminary hearing by the planning inspectorate began yesterday, though a full inquiry is still to come. A final decision by ministers is due next year, uncomfortably close for any of those with London riverside constituencies to defend in the general election a year later.

Opposition is voluble, well-connected and wide-ranging, including actor Patrick Stewart and musician Annie Lennox. Some localities face years of 24-hour, seven-day construction, along with truncated parks and ugly air intakes if Thames Water gets approval for the £4 billion project.

Last month, the company – which has not paid taxes to the Treasury for a couple of years because it has so many capital investment write-offs to use up – did little for its popularity when it applied to the water regulator, Ofwat, to impose a £29 surcharge on home-owners to pay for the sewer.

In Wapping, once a blighted district, but now rising in popularity, residents fear the super-sewer could cost them the pleasures of King Edward’s Memorial Park, a green spot in that part of the city.

Chopped down
“Our park will be turned into an industrial site for up to seven years and will be concreted over. Trees will have to be chopped down and cranes and lorries will take their place. It would be devastating – it is a secret oasis that many people in the community love coming to,” Victoria Buxton of Save King Edward Memorial Park told a recent public meeting.

In Bermondsey, Thames Water wants to build on King’s Stairs Gardens, a small but much-frequented park:
“They want to turn it into an industrial zone for seven years – felling all its mature trees,” former TV presenter David Bellamy told local journalists.

Defending itself, Thames argues that it has cut the number of construction sites along the route by more than half, while much of the drilling of the 7.2-metre tube 60 metres underground will be done by Channel Tunnel-style drillers far out of sight.

However, what is drilled must be removed: five million tonnes of chalk, clay and gravel will have to taken away, while the main sewer will have to connect to nearly two dozen others, not to mention ventilation shafts, maintenance buildings and other back-ups.

Though clearly necessary then and now, Bazalgette’s monumental construction was actually built upon a misconception, since Victorians, who had seen 50,000 people die in the city because of cholera, believed that the disease was spread by an airborne miasma.

Drinking water
Indeed, London’s original super-sewer was already in operation before it was finally understood that cholera is waterborne – the epidemics had been caused by the fact that London’s drinking water was coming from the river into which raw sewage had been flushed.

Today, some environmentalists argue that the successor to Bazalgette is not necessary, arguing, for example, that it has been shown that a pumping station in Southwark can be upgraded without needing to be linked to a super-sewer.

London’s sewage is not the problem, insists Christian Sarrasin, from Clean Thames Now and Always. Instead, too much rainwater is running off streets and roofs directly into it, rather than being stored in nature’s way in the earth.