Britain to put up fence at Channel tunnel port 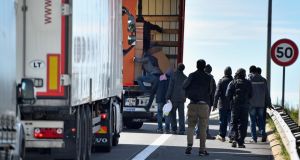 Migrants continue to try and board lorries bound for Britain in Calais. More than 3,000 people, predominantly from Africa and the Middle East, are estimated to be living rough around Calais, waiting to cross into the UK. Photograph: Jeff J Mitchell/Getty Images

Britain is deploying high-security fencing used during the Olympic Games and last year’s Nato summit in Wales to the Channel tunnel port in France to stop illegal migrants breaking into lorries bound for the UK.

Britain’s immigration minister James Brokenshire announced that 4km of nine-foot fencing – known as the National Barrier Asset – would be erected at the lorry terminal in Coquelles, near Calais. It should be in place by the end of July. The fence is one element of a broader push to step up border security between northern France and the UK amid a growing migrant crisis in the area.

A strike by French ferry workers last week sparked chaos in Calais and Coquelles as hundreds of migrants hoping to reach the UK took advantage of the disruption to try to break into lorries stuck in queues.

More than 3,000 people, predominantly from Africa and the Middle East, are estimated to be living rough around Calais, waiting to cross into the UK.

In the year to April, border authorities stopped 39,000 attempts by illegal migrants trying to cross the Channel, more than double the amount on the previous year.

Ukip leader Nigel Farage called on the government to “get tough and defend our borders properly” in a newspaper article. “We must put in place a checking system at Dover for every car and lorry coming into the UK,” he said. “The utopian dream of free movement has hit the buffers.”

The additional fencing comes after Mr Brokenshire last week announced more resources for screening arrivals at Dover, as well as a new 90-strong task force to tackle organised immigration crime in the Mediterranean. He will also meet haulage companies this week to discuss the issue. – Copyright The Financial Times Limited 2015