Brexit: Which side correct in debate on costs to UK of EU role? 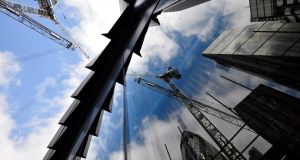 On the website of the Vote Leave campaign is a live sterling figure which slowly ticks upwards. One second it stands at £508,669,966,129, a moment later it creeps up a few hundred pounds.

The figure is the amount the campaign group - backed by Conservative party figures such as Boris Johnson and Michael Gove - has put as the total contribution the UK has made to the EU.

In more punter-friendly language, it argues the UK spends the same on EU contributions every week as it would cost to build an NHS hospital (£350 million - or €443 million) and says the country gets less than half that money back.

On the Remain side of the debate, the opposite picture is painted. The Confederation of British Industry claims British membership of the EU brings a net benefit of £3,000 a year to every household through trade, investment and jobs.

But which side is correct? Neither, according to Iain Begg, a research fellow from the European Institute in the London School of Economics.

In a recent blog post, he said both sides are prone to picking the facts that suit their own agenda, and pushing aside the figures that do not.

“Unsurprisingly, both sides of the debate cherry-pick the statistics that support their side of the argument, but both are also prone to misrepresent the facts and to neglect data that tell a different story,” he wrote.

So how much does Britain contribute?

As might be expected, one figure does not give the full story. Full Fact, a charity which checks factual claims made by politicians, pressure groups and the media has broken down Britain’s contributions to the EU budget for last year.

Without a rebate that the UK gets every year on its membership fee, it would have had to contribute £18 billion.

However with the rebate - which last year was £5 billion - the actual membership fee stood at £13 billion.

Take from that the amount the EU spent on Britain - £4.5 billion - and you are left with a net contribution of £8.5 billion.

In 1984, then prime minister Margaret Thatcher threatened to stop payments to the budget at a time when the UK was on track to become biggest net contributor to the EU budget, while at the same time being the third poorest member.

At a summit in Fontainebleau, she said she was not asking other member states for money, but for Britain’s money back.

Fans of the Iron Lady saw the establishment of the rebate - 66 per cent of the gap between what it paid in and what was paid back - as one of her finest moments. It is applied straight away so the money does not go to Brussels and then come back to the UK.

Sounds a lot, why so much?

At the time, spending by Europe was mostly aimed at farms - 70 per cent of spending in fact. Since the UK had a relatively small number of farms, it got a small share of the farm subsidies. Hence the move by Thatcher to pull some back.

What about the £4.5 billion that is spent on Britain?

Every EU country gets money to support development. In Britain’s case, this amounted to £4.5 billion last year in regional aid and agricultural subsidies.

According to Full Fact, this mainly went to farmers and for poorer areas, including Wales and Cornwall.

With no lack of glee from some - or possibly many - quarters, it was noted that the editor of the eurosceptic Daily Mail, Paul Dacre, benefited from £88,000 in EU subsidies for his country houses in Sussex and the Scottish Highlands in 2014 under the Common Agricultural Policy.

But Britain is still a net contributor to the EU?

To the tune of £8.5 billion. Iain Begg points out that through the country’s 43 years of membership of the EU, just the UK and Germany have “consistently been net contributors” to the finances.

Step back a bit - how is the budget worked out in the first place?

Member states are expected to contribute 1 per cent of their GDP to the EU budget.

Since the rebate, Britain has had to pay slightly less than this proportion, however.

From another angle, European Commission figures put the UK as the third biggest contributor to the EU budget, just behind France and Germany.

But still, if Britain leaves, the Treasury still stands to save £8.5 billion?

Not so simple. The idea that a Brexit would equal lower tax bills is a strained concept, according to a recent analysis in the Economist.

For access to the single market, Britain would still have to pay. This could be achieved by joining Norway, Iceland and Liechtenstein in the European Free Trade Association.

However, Norway pays about 90 per cent of Britain’s net contribution to the EU.

Any savings would also have to be seen in context of what is expected to be an upheaval in the markets if a vote for Brexit goes through.

When London lord mayor Boris Johnson announced he backed a Brexit, the pound suffered the biggest one-day fall against the dollar in five years.