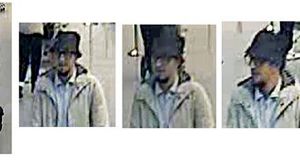 Undated handout CCTV stills issued by the Belgian Federal Police of one of three men thought to be connected with the Brussels attacks, who is believed to be on the run. The man has since been named as Najim Laachraoui. Photograph: PA 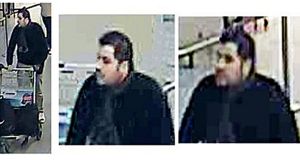 Handout CCTV stills issued by the Belgian Federal Police of one of three men believed to be connected with the Brussels attacks on Tuesday. Photograph: PA 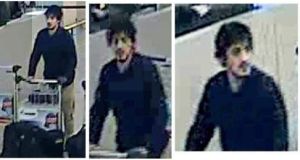 A handout image provided by Belgian Federal Police shows a CCTV grab of one of the three suspects in the Zaventem airport attack in Brussels, Belgium. Photograph: EPA

At least one Brussels bomb suspect is still on the run after the attacks in the city on Tuesday which killed at least 34 people and left around 200 injured, including four Britons, a Belgian prosecutor has said.

The second airport bomber has not been identified.

A third suspect, who has not been officially named but has been identified in reports as Najim Laachraoui (25), is allegedly on the run.

Reports earlier on Wednesday had suggested that Laachraoui had been arrested but Brussels police said this was not the case.

Newspaper reports suggest that Laachraoui’s DNA has been found in houses used by the Paris attackers last year, prosecutors said on Monday, and he had travelled to Hungary in September with Paris attacks prime suspect Salah Abdeslam.

Police in Paris and Belgium had been looking for Laachraoui as part of the investigation into the Paris attacks. Laachraoui, born May 18th, 1991, is understood to be using the alias Soufiane Kayal.

According to Belgian state broadcaster RTBF the el-Bakraoui brothers were well-known to the police as allegedly longstanding criminals in the Belgian capital and more recently it emerged they had links to November’s Paris attacks.

Earlier it had been understood that the el-Bakraoui brothers had both struck at the airport.

The connection to the Paris attacks and to recent police raids in Brussels, in which some suspects escaped from police, is a significant development.

If the Brussels bombers prove to be part of the same cell as the Paris attackers, this will raise serious questions about potential police and intelligence failings.

The el-Bakraoui brothers are from Brussels and have a long history in organised crime in Belgium. They were among the suspects on the run and being hunted by Belgian police since the police raids of recent days.

One of the brothers had rented the flat in Forest, south west Brussels which was raided by police last Tuesday, exactly a week before the Brussels attacks, and where Salah Abdeslam, the Paris suspect had been present.

In that Forest raid, heavy weapons and an Islamic State flag were found and one member of the Paris attacks cell, an Algerian Mohamed Belkaïd, was shot by a police sniper.

One of the el-Bakraoui brothers is also known to have rented one of the hideouts of the Paris jihadist team, in Charleroi in Belgium, where two of the attackers met before heading to Paris in November to carry out the attacks that killed 130 people: Abdelhamid Abaaoud, the ringleader, and Bilal Hadfi, one of the Stade de France suicide bombers.

One of the el-Bakraoui brothers is also believed to have provided ammunition and weapons for the Paris attacks in which gunmen opened fire on bars and at a rock concert at the Bataclan, RTBF reported.