...as long as dignity maintained 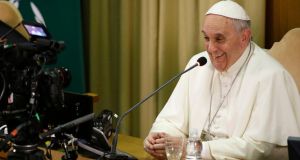 Pope Francis gives his speech in the Synod hall on the occasion of the closing ceremony of the IV Scholas Occurrentes World Educational Congress, Thursday February 5th. Photograph: Gregorio Borgia/AP

Pope Francis says it is OK to smack your children to discipline them — as long as their dignity is maintained.

Francis made the remarks this week during his weekly general audience, which was devoted to the role of fathers in the family.

He outlined the traits of a good father — one who forgives but is able to “correct with firmness” while not discouraging the child.

The pope said: “One time, I heard a father in a meeting with married couples say ‘I sometimes have to smack my children a bit, but never in the face so as to not humiliate them’.

“How beautiful! He knows the sense of dignity! He has to punish them but does it justly and moves on.”

The Rev Thomas Rosica, who works with the Vatican press office, said the pope was obviously not speaking about committing violence or cruelty against a child but rather about “helping someone to grow and mature”.

He said: “Who has not disciplined their child or been disciplined by parents when we are growing up?

“Simply watch Pope Francis when he is with children and let the images and gestures speak for themselves!

“To infer or distort anything else ... reveals a greater problem for those who don’t seem to understand a pope who has ushered in a revolution of normalcy of simple speech and plain gesture.”

The Catholic Church’s position on corporal punishment came under sharp criticism last year during a grilling by members of a UN human rights committee monitoring implementation of the UN treaty on the rights of the child.

In its report, the committee members reminded the Holy See the treaty explicitly requires signatories to take all measures, including legislative and educational, to protect children from all forms of physical or mental violence — including while in the care of parents.

It recommended the Holy See amend its own laws to specifically prohibit corporal punishment of children, including within the family, and to create ways to enforce that ban in Catholic schools and institutions around the globe.

The recommendations were prompted by reports to the committee of widespread physical abuse and use of corporal punishment in Catholic-run schools and institutions, particularly in Ireland, that committee members said had reached “endemic levels”.

The Vatican had argued it in no way promoted corporal punishment, but that it also had no way to enforce any kind of ban on its use in Catholic schools, over which it has no jurisdiction.

It noted it was only responsible for implementing the child rights treaty inside the Vatican City State.

The Holy See is not the only signatory to the convention that has been singled out on the issue.

Britain received a similar recommendation to repeal its law allowing parents to spank their children when it came before the UN committee in 2002.

Some 39 countries prohibit corporal punishment in all settings, including at home, where most abuse occurs. They range from Sweden and Germany to South Sudan and Turkmenistan.

In the United States, parents can legally hit their child as long as the force is “reasonable”. In 19 US states, it is still legal for personnel in schools to practice “paddling”.

Meanwhile Pope Francis will address a joint meeting of Congress on September 24th, a first for the leader of the world’s Roman Catholics.

During his trip to the US, Francis is also expected to visit the White House and speak at the United Nations. He will participate in a massive Catholic rally for families in Philadelphia.

It will be his first visit to the US in a papacy that began two years ago.

1 Coronavirus: House parties a ‘disaster’ for containment efforts
2 Gardaí disperse crowds gathered at coastal beauty spots
3 Six counties free of new cases of Covid-19 over past week
4 How lockdown has helped us to save money - and find new ways to spend it
5 George Floyd death: Man shot and killed by law enforcement in Kentucky
Real news has value SUBSCRIBE