Russian pursuit of a political solution was doomed, and it now warns of deep instability 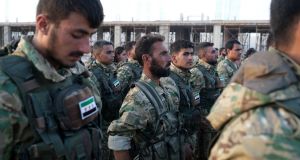 Turkey-backed members of the Syrian National Army preparing for a military operation into Kurdish areas of northern Syria on Tuesday. Photograph: EPA

Turkey’s invasion of northeastern Syria has caught Russia between its desire to see US troops out of Syria and its commitment to Damascus to regain all the country’s territory. Russian foreign minister Sergei Lavrov on Wednesday blamed the imminent Turkish offensive on US president Donald Trump.

Trump gave a green light to Turkey to invade by deciding to withdraw US forces but warned Turkey of heavy retribution if its military goes too far. Lavrov says US actions in Syria are “full of contradictions” and the US inability to stick by agreements “could ignite the entire region”.

Until Trump took this decision, Russia, Iran and Turkey had been working together to end fighting, stabilise Syria, and promote a political solution. This policy was, however, based on a fundamental contradiction. Russia and Iran back Syria’s government while Turkey supports rebels and jihadis seeking to topple it.

Consequently their alliance was doomed from the start. Turkey is about to break its pledge to respect Syria’s territorial integrity by invading the country to clear a 30km-wide “safe zone” along the border of Syrian Kurdish fighters, regarded by Ankara as terrorists threatening Turkey’s security.

While Moscow responded verbally to the US, Tehran held military exercises near Iran’s frontier with Turkey. The difference between the two is that Russia has global as well as regional ambitions while Iran confines itself to the region.

Russia is eager to see US troops leave Syria, weakening Washington’s influence in the region, and is determined to draw Turkey away from Nato, underming the alliance. Iran’s objective is regional. It fights Sunni jihadis to prevent them from seizing power from the Syrian secular government, a longstanding ally.

Kremlin spokesman Dmitry Peskov says Russia recognises “Turkey’s right to ensure its security”, but he warns Ankara to “refrain from any actions that may create obstacles on the path of a Syrian [political] settlement”. His comment is timely because Syria’s constitutional committee is set to meet in Geneva on October 30th with the aim of drafting a post-war document leading to formation of a transitional government and elections.

Peskov also reiterates Moscow’s insistence that “all foreign troops illegally in Syria must leave the country”. Russia agrees that while Turkey has legitimate security concerns, there must be no permanent occupation.

To avoid this, Moscow calls on Ankara to accept the return of the Syrian army to the border area to prevent attacks by Syrian Kurds allied to secessionist Turkish Kurds.