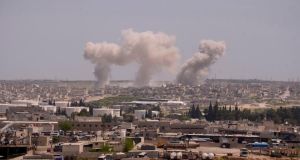 
An end to the Syrian arms embargo is “the only way” to ultimately stop the bloodshed, Walid Saffour, ambassador to the UK of the Syrian National Coalition of Revolutionary and Opposition Forces, argued during his visit to Dublin yesterday.

“We are asking the European community to lift the Syrian arms embargo”, Mr Saffour told a cross-party meeting of TDs and Senators yesterday at Leinster House, hosted by Senator Maureen O’Sullivan and the Irish Syria Solidarity Campaign.

A native of the Syrian city of Homs and member of the Syrian Human Rights Committee for 15 years, Mr Saffour was appointed as the UK representative by the National Coalition last November.

Twenty-three members of his own family have been killed during the two-year conflict, which has claimed the lives of 70,000 people and left over a million as refugees.

“My only sister was killed in the shelling in Homs at the end of last year,” he said. “She died after two weeks of suffering her injuries.”

At a public meeting on the Syrian conflict held at Griffith College, Mr Saffour also highlighted a UN report released this week which details the widespread use of rape by the Syrian army and pro-regime militia as a weapon of war.

He also warned that foreign humanitarian aid being delivered through official channels in Syria is controlled by the regime and not reaching people in need. Ireland has given over €8.15 million in aid to Syria over the past year, with the Tánaiste and Minister for Foreign Affairs Eamon Gilmore announcing a further €1 million in assistance from Ireland for ICRC and UNHCR operations within Turkey following his visit to refugee camps near the Turkish-Syrian border.

The EU remains divided on whether to lift the Syrian arms embargo, which expires at the end of May, following a meeting of EU foreign ministers in Dublin last month. Britain and France are continuing to call for the EU to give military assistance to the Syrian opposition.

On Wednesday, Mr Gilmore reasserted that Ireland would not support any actions which could contribute to greater militarisation of the conflict. He also remarked on the growing influence of extremist groups on the ground.