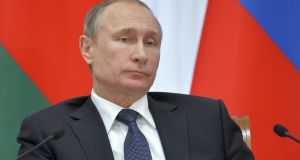 Russian president Vladimir Putin has pledged to do “whatever is necessary” to carry out the ceasefire and the “complicated” process of negotiating peace. Photograph: Alexei Druzhinin/Sputnik/Kremlin.

Russian warplanes pounded insurgent-held areas across Syria yesterday ahead of the midnight cessation of hostilities agreed by the Syrian government and the Kurdish militia while the Saudi-sponsored opposition, representing 100 armed factions, said they would observe a two-week halt to hostilities.

Once the UN Security Council had endorsed the ceasefire last night, UN envoy Staffan de Mistura was expected to announce a resumption on March 7th of talks between the government and opposition on the formation of a unity government to draft a new constitution and oversee elections.

The Riyadh-based umbrella grouping of political and military factions, the High Negotiations Committee, argued a limited truce would test the intentions of the government and its Russian and Iranian backers.

Russia’s president Vladimir Putin has pledged to do “whatever is necessary” to carry out the ceasefire and the “complicated” process of negotiating peace. He telephoned US president Barack Obama, Saudi King Salman and Iranian president Hassan Rouhani to urge their co-operation in ending five years of bloodshed.

Mr Obama said the violence was not expected to end immediately due to attacks by groups not bound by the ceasefire and the involvement of regional powers involved in a “proxy war” on Syrian soil: Saudi Arabia, Turkey and Iran.

US secretary of state John Kerry who, along with Russia’s foreign minister Sergei Lavrov, has worked tirelessly for the ceasefire, warned of a “Plan B”, suggesting direct military action, if the ceasefire effort failed. Russia dismissed any “Plan B” until “Plan A” was tested.

The cessation of hostilities will be partial. Islamic State and the al-Qaeda-linked Jabhat al-Nusra, designated “terrorist” groups, have been excluded from the ceasefire while hundreds of militias have not been consulted.

The 17-member international Syria support coalition, co-chaired by the United States and Russia, met in Geneva to specify areas where continuing air strikes were to be permitted and to resolve other issues, before the truce began.

Damascus and Moscow say they will continue attacking areas where Jabhat al-Nusra is deployed, with militias backed by the US and its allies. The strategic Daraya suburb southwest of Damascus has been cited as a location where Nusra is fighting with other factions, although insurgents claim there is no Nusra presence there.

Last week, Turkey dispatched 850 insurgents across the border into Syria to reinforce fighters holding the Syrian frontier town of Azaz and to prevent the Syrian army from cutting the route for supplies, arms and men to insurgent-held districts of Aleppo city.

Riyadh has accepted the ceasefire but has deployed jet fighters at Turkey’s Incirlik airbase to participate in an anti-Islamic State campaign or, it is suspected, to protect Saudi-supported insurgents from attacks by Russia and the Syrian army.

On the humanitarian front, Norwegian aid official Jan Egeland said 180 lorries of supplies had reached six areas under siege over the past two weeks, providing food and medicine to one quarter of the 480,000 people living in 17 besieged areas.