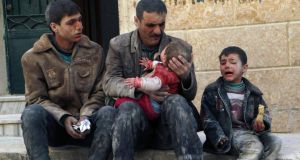 A man holds a baby saved from under rubble after what activists say was an airstrike by forces loyal to Bashar al-Assad in Masaken, Hanano, in Aleppo yesterday. While talks on a Syrian peace deal continued in Geneva, violence on the ground escalated. Photograph: Hosam Katan/Reuters


Russia’s foreign minister Sergei Lavrov has accused the US of using the Syrian peace talks to effect “regime change” rather than to bring about an end to the deadly conflict.

He was responding to a comment by US secretary of state John Kerry that forming a transitional authority was the sole purpose of the talks taking place in Geneva, Switzerland. A second round of negotiations between government and opposition representatives began last Monday but no progress has been made.

The sharp exchange of words between Mr Lavrov and Mr Kerry – who accused Russia of walking away from commitments – reflect the wide divergence in the approach of the two sponsors of the talks and bode ill for the planned third round, which was to be convened after a pause.

Settlement
The UN-backed Syria. pdf">Geneva communique, drawn up in June 2012, is intended to be the basis for a settlement in the talks. It includes provision for the establishment of a transitional governing body, the start of a national dialogue, a review of the constitution and legal system and the holding of free and fair elections.

Mr Lavrov said yesterday, however, that instead of discussing the entire plan put forward in the communique, supporters of the opposition had focused only on the creation of a transitional authority, causing the talks to go “in circles”.

His statement came the day after UN mediator Lakhdar Brahimi met withRussian deputy foreign minister Gennady Gatilov and hisUS counterparunder secretary of state Wendy Sherman and appealed to their governments to use their influence to break the deadlock.


Transitional body
The government insists on giving priority to the first section in the blueprint, which deals with ending the conflict before taking up the issue of the transitional body.

The opposition seeks to give priority to forming a transitional authority that would have “full executive powers,” thereby ousting president Bashar al-Assad, whose position the government is not prepared to discuss.

The Russia-US dispute coincides with escalating violence in Syria. The UN has expressed concern over a Syrian army build-up around the insurgent-held town of Yabroud, located along the main Damascus-Homs highway. Fearing an imminent assault, thousands have fled.

Jihadis blew up the Carlton hotel where troops were based in Aleppo’s old city, killing at least five soldiers, a car bomb killed 32 people in the town of al-Yadouda near the Jordanian border and fighting erupted between rebels and jihadis in the north, the Britain-based Syria Observatory for Human Rights reported.