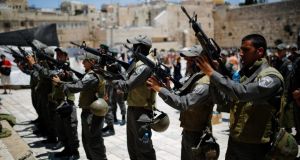 A 46-year-old Israeli Jewish man has been shot and killed at the Western Wall in Jerusalem’s Old City, Judaism’s holiest site, by a security guard who mistook him for a Palestinian terrorist.

The guard told police that Doron Ben Shlush shouted “Allahu Akbar,” an Arabic phrase meaning “God is greatest” and looked like he was pulling something from his pocket. The phrase, common in Muslim parlance, has often been shouted by Islamic militants carrying out suicide attacks.

Paramedics tried to resuscitate the man, but he died from his wounds 20 minutes after he was shot. The Western Wall compound was closed to visitors.

Remand extended
The Jerusalem magistrates court extended by five days the remand of the security guard who is suspected of murder.

The judge described the incident as “severe”, noting that it ended in the death of an innocent person. The guard kept silent throughout the hearing.

Police spokesman Micky Rosenfeld said the guard opened fire because he suspected the man was a Palestinian terrorist. “The fact he shouted ‘Allahu Akbar’ seems to be why the security guard drew his weapon and fired a number of shots at him,” he said. “We are looking into what the victim’s motives were.”

Regular worshippers at the Western Wall described Mr Ben Shlush as a familiar figure at the site, with some describing him as an apparently mentally unstable but harmless individual.

David Dahan, a witness who knew the victim, expressed dismay over the shooting. “I don’t understand why he was shot. Everybody knows him and his behaviour. He often acted in a nervous manner,” he said.

“He was sitting down this morning, reading the newspaper as usual. For some reason, he began screaming and after that he approached the toilet. After a short time, I heard at least seven or 10 gunshots.”

‘A tragedy’
Western Wall rabbi Shmuel Rabinowitz issued a statement saying he regretted the shooting. “This is a tragedy,” he said, adding he had “every faith in the police investigation”.

The Western Wall is a remnant of the ancient wall that surrounded the Jewish Temple courtyard on the Temple Mount, a site also revered by Muslims as the Haram as-Sharif, or Noble Sanctuary, marking the place where they believe the prophet Muhammad ascended to heaven.