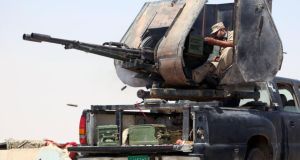 A member of the allied Iraqi forces consisting of the Iraqi army and fighters from the Popular Mobilisation units, fires heavy artillery on the front line during battles with Islamic State (IS) group jihadists on the road leading to Saqlawiya, north of Fallujah. Photograph: Mohammed Ali/AFP/Getty Images

Islamic State militants have seized a key town in central Syria after clashes with president Bashar Assad’s forces, according to activists.

The town of Qaryatain lies south west of the historic site of Palmyra, which the extremist group seized in May.

The capture of Qaryatain, a heavily populated town, allows IS to link up areas under its control in and around Palmyra with areas in the eastern countryside of Qalamoun, north of Damascus.

The Britain-based Syrian Observatory for Human Rights said the IS group seized the town after three suicide bombers targeted army checkpoints at the entrance, setting off a fierce battle.

The jihadist group’s latest gain gives it control of a stretch of territory extending from the eastern suburbs of Homs to eastern areas of Qalamoun province.

Al-Qaryatayn is located halfway between the cities of Homs, the northern ancient city of Palmyra and the capital, Damascus.