Attack on gas plant north of Baghdad, which killed at least 14 people, began at dawn

At least eleven people have been killed in bomb attacks claimed by Islamic State against a state-run cooking gas factory on the outskirts of Baghdad. Video: REUTERS 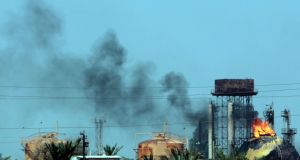 Flames and smoke rise from tanks after a suicide bomb attack on the Taji gas plant, about 20 kilometres north of the Iraqi capital Baghdad. Photograph: Sabah Arar/AFP/Getty Images 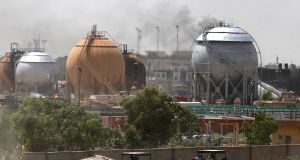 Smoke rises from gas storage tanks after a bomb attack against a state-run cooking gas factory in Taji at Baghdad’s northern outskirts on Sunday. Photograph: Reuters

Islamic State has launched a coordinated assault on a natural gas plant north of Baghdad which killed at least 14 people, while a string of other bomb attacks in and around the capital killed 15 others.

The attack on the gas plant started at dawn with a suicide car bomber hitting the facility’s main gate in the town of Taji, about 20 km north of Baghdad.

Several suicide bombers and militants then broke into the plant and clashed with the security forces, an official said, adding that 27 troops were wounded.

The Islamic State-affiliated Aamaq news agency credited a group of “Caliphate soldiers” for the attack.

A car bomb targeting a shopping area in the town of Latifiyah, about 32 km south of the capital, killed seven people, including two soldiers, police and hospital officials said.

Eighteen people were also wounded in the attack, four of whom were soldiers.

Sunday’s attacks killed 29 people in total across Iraq. Since Wednesday, more than 140 people have been killed in a spate of bombings in Baghdad and elsewhere.

Islamic State extremists still control significant areas in northern and western Iraq, including the second-largest city of Mosul. It has declared an Islamic caliphate on the territory it holds in Iraq and Syria.

The group has recently increased its attacks far from the front lines in a campaign which Iraqi officials say is an attempt to distract from their recent battlefield losses.