Family denies Palestinian killed by Islamic State was a spy 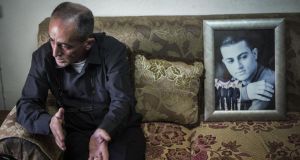 Mohamed Musallam can be seen in a video released on Tuesday on his knees wearing the familiar orange jumpsuit of an Islamic State captive. Before he is shot in the head by a boy, he admits under obvious duress that he was “an agent for the Israeli Mossad”.

His family insists that Musallam, a 20-year-old Palestinian from East Jerusalem, was no spy, a prospect far more embarrassing for his father and brothers than his appearing to have travelled to Syria to wage jihad with the Islamic State.

In the 13½-minute video released by the Islamic State, Mohamed Musallam said that his father and another brother, Ismail (27), urged him to assist the Israeli intelligence agency. He said he was sent to Syria to join Islamic State, locate its bases and weaponry and identify other Palestinians fighting for the group.

“I asked my father, Said Ismail Musallam, and my brother Ismail Said Musallam, and they encouraged me,” he said in the video. “And then I knew they were both spies,” he added, before he was killed by the boy.

French terrorism experts who examined the video suspect that the man who oversaw the killing is Sabri Essed, a French jihadist who is believed to have gone to Syria to join the Islamic State. Terrorism experts close to French intelligence, however, believe that the man shown is likely to be a relative of Mohamed Merah, who killed seven people in Toulouse, France, in 2012.

Mohamed Musallam’s father said his son was lured to Syria with promises of women, money and the excitement of battle. He added that his son was an irreligious, chain-smoking volunteer firefighter, not a willing jihadist, and that he must have been killed trying to escape.

The family said they had kept in touch with him on social media. In one of his last video chats with his son, Said Musallam said Mohamed told him that he was frightened by the US-led airstrikes that hit nearby Islamic State targets in Syria and that he was afraid of his commander. “He had long hair, a beard, a Kalashnikov and knives,” Said Musallam said of his son. “But he looked down, embarrassed. He couldn’t meet my eyes.”

Ahmed Musallam said that when he told his father that Mohamed was fighting in Syria, he “fell on the ground”.

“He was shocked,” Ahmed Musallam said. “It wasn’t a response of a man who had sent his son to Syria. It was the response of a father who has lost his son.”

The Musallam family lives in a working-class Israeli area of East Jerusalem, in the Neve Yaakov settlement, one of a dozen Jewish communities established in territory seized from Jordan in 1967. The family took Israeli citizenship, something only about 5 per cent of Jerusalem’s 300,000 Palestinian residents did. Ismail Musallam, who is accused of recruiting Mohamed to inform on the Islamic State, served in an Israeli army unit of Bedouin trackers, unusual for a Palestinian, and worked for the Israeli police.

Many Palestinians suspect Arabs who live in Israeli settlements and accept Israeli citizenship of collaboration with a government they view as an occupying force, lending popular credence to the allegation that Mohamed was a spy for Israel. But whether he was a militant for the Islamic State or an informer for Israel, his family feels public shame.

Said Musallam said he notified the Israeli police that his son was missing and told the Red Cross that he was being held captive in Tal Abyad, Syria. Responses to his death on the Facebook page of a Palestinian news site, Raya FM, showed little sympathy.

“This [man] isn’t Palestinian and he doesn’t even honor our shoes,” wrote one Facebook user who identified himself as Husam Miqdad. “He is a creation of dirty Israel, from a dirty family that sold itself to the devil and now they have found their just retribution.”

Nader Nasser, another Facebook user, said: “Look, he was a spy for Israel. May he, and the Islamic State, disappear.” – (New York Times service)