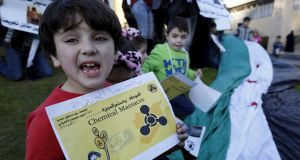 Syrian children carry placards as they call for the lifting of the siege off Madaya and Zabadani towns in Syria, in front of the offices of the UN headquarters in Beirut, Lebanon on Saturday. Photograph: Reuters

Ambulances and buses entered the besieged rebel-held Syrian town of Zadabani on Monday to ferry scores of the insurgents to Turkey under a deal brokered by the United Nations, rebel sources there said.

Under the deal, rebel fighters holed up for months in the town near the Lebanese border have been promised safe passage to Beirut airport, then on to Turkey.

At the same time, around 300 families in two besieged Shi’ite towns in the mainly rebel-held northwestern province of Idlib were due to head to the Turkish border, and then fly on to Beirut.

Relief workers and rebel fighters helped carry several young men in wheelchairs onto ambulances in a square in Zadabani, one witness told Reuters.

Much of the town was devastated in a major offensive launched in July against the insurgents by the Syrian army and its allies from the Lebanese Shi’ite militant group Hezbollah.

The United Nations and foreign governments have tried to broker local ceasefires and safe-passage agreements as steps towards the wider goal of ending Syria’s near five-year civil war.

Iran, which backs the government, and Turkey, which backs the rebels, helped organise local ceasefires in Zabadani and the two villages in Idlib in September in the first phase of the deal overseen by International Committee of the Red Cross.

The mostly Sunni Muslim rebel fighters going to Turkey would then be able to go back to rebel-held areas in Syria through the northern Turkish border or stay for treatment, according to rebel sources close to the negotiations.

They are then expected to go back to other parts Syria, Syrian Minister of National Reconciliation Ali Haider said on Hezbollah’s Manar TV station on Monday.