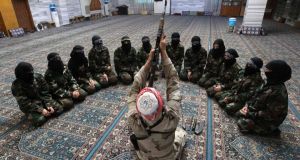 Abu al-Taib, the leader of Ahbab Al-Mustafa Battalion, demonstrates to female members as he holds a gun during a military training in a mosque in the Seif El Dawla neighbourhood in Aleppo on Monday. Photograph: Muzaffar Salman/Reuters 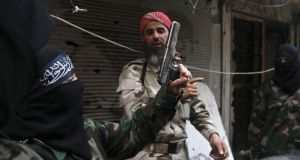 A female member of the Ahbab Al-Mustafa Battalion holds a gun as she undergoes military training in Aleppo’s Salaheddine district. Photograph: Muzaffar Salman/Reuters 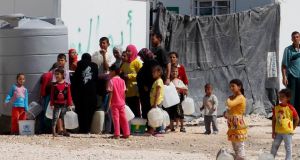 Syrian refugees wait to collect water at the Al Zaatri refugee camp in the Jordanian city of Mafraq, near the border with Syria yesterday. Photograph: Muhammad Hamed/Reuters

An opposition monitoring group that has tracked Syria’s widening civil war said today that more than 100,000 people had died in the 27-month conflict.

The Syrian Observatory for Human Rights, which is based in Britain and relies on a network of activists in Syria for its information, put the total number of dead at 100,191 since the Syrian revolt began in March 2011 - several thousand more than the latest UN estimate of at least 93,000 by the end of April.

It claimed pro-government forces took far more casualties than rebels seeking the overthrow of president Bashar Assad, while civilians accounted for more than one-third of the overall fatalities, the biggest single category.

Rami Abdul Rahman, the founder of the Syrian Observatory, said in a telephone interview that the statistics were compiled by adding together the daily tallies his organisation has kept since the beginning of the uprising. Those daily figures, in turn, he said, were based on information from a variety of sources like the organisation’s activists on the ground in Syria, lawyers and health workers in civilian and military hospitals, rather than from combatants whose estimates could be unreliable.

Throughout the Syrian conflict, both sides have sought advantage in propaganda and media campaigns that have figured prominently alongside physical combat.

“In war, both sides lie,” Abdul Rahman said, citing examples of exaggerated death tolls that were not corroborated by evidence from activists, and other cases when people who died of natural causes were listed as combat deaths.

His group also said both sides were likely to have under-reported their own casualties. The United Nations’ and opposition group’s estimates offered the caveat that the true scale of the killing may be much greater.

“The death toll does not include more than 10,000 detainees and missing persons inside of regime prisons, nor does it include more than 2,500 regular soldiers and pro-regime militants held captive by rebel fighters,” the Syrian Observatory said in a statement on its website.

“We also estimate that the real number of casualties from regular forces and rebel fighters is twice the number documented, because both sides are discreet about the human losses resulting from clashes,” the statement added. In its breakdown, the group said the dead included 36,661 civilians, including 8,000 women and children, 13,539 rebel fighters and 2,015 defectors from government forces. It was not immediately clear from the statement how the civilians died.

Among pro-government forces, the group said 25,407 regular soldiers had been killed along with 17,311 members of militias and pro-government units including some listed as informers for the government. The war has drawn in an unknown number of foreign militants and outside fighters, including Lebanese Hizbullah forces.

The figures released today said the dead included more than 2,500 unidentified and non-Syrian combatants on the rebel side and 169 fighters from Hizbullah.

The figures suggested that, among combatants, the number of pro-government casualties was almost more than twice as high as those among the rebels and their foreign allies.

Earlier this year, Abdul Rahman, who fled Syria 13 years ago, said his network relied on four men inside Syria who help to report and collate information from more than 230 activists on the ground. His group is based in the English Midlands city of Coventry and operates out of a semidetached redbrick house on a residential street.

Meanwhile, the Syrian information minister today lashed out at Saudi Arabia, saying Riyadh is responsible for his country’s conflict.

Saudi Arabia considers the intervention of Iran and Hizbullah in the Syrian conflict as threatening and argues the rebels must be given military aid, the kingdom’s foreign minister Prince Saud al-Faisal stated today during a press conference in Jeddah with US secretary of state John Kerry.

The prince called for a UN Security Council resolution “to halt the provision of army to the . . . regime and declare (its) illegitimacy”.

In Geneva, following talks with US and Russian officials, international envoy Lakhdar Brahimi expressed disappointment that the proposed Geneva conference on the war in Syria had been delayed.

It was also reported today that Russia may have withdrawn defence ministry personnel from Syria. If accurate, the report could indicate Russia was concerned about the danger to its workers posed by the rebellion.

Russia’s modest maintenance and supply facility at Tartous is its only naval base outside the former Soviet Union, and has given Russia a foothold in Syria during the conflict.

President Vladimir Putin has flexed Russia‘s muscle near Syria’s shores, ordering a naval unit to be deployed in the Mediterranean Sea for the first time since the 1991 Soviet collapse.

There as been speculation Russia has used the facility as a transit point for shipments of weapons and ammunition to Assad‘s forces. Russia has said its weapons supplies to Dr Assad’s government are legal and mostly defensive.

Russia has shielded Dr Assad during the conflict, blocking Western-backed UN Security Council resolutions meant to push him from power or pressure him to end the bloodshed.