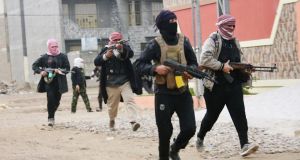 Tribal fighters who have been deployed on to the streets patrol in the city of Falluja yesterday. Photograph: Reuters

A series of bombs in Shia neighbourhoods of Baghdad also killed at least 20 people.

The recent gains by the insurgents have been a blow to the Shia-led government – as sectarian violence has escalated since the US withdrawal. US secretary of state John Kerry said Washington was “very, very concerned” by the fighting and would support the Iraqi government, but would not send in American troops.

Video of the air strikes in Anbar – apparently taken by aircraft at night – was released by Iraq’s defence ministry showing al-Qaeda hideouts being bombarded. It showed men gathered around a vehicle, then running away as the site was struck.

Iraqi prime minister Nuri al-Maliki vowed to “eliminate” al-Qaeda-linked Islamic State of Iraq and Syria (Isis) which is blamed for bombings and has taken control of Ramadi, the capital of the western Anbar province, Iraq’s largest, and nearby Falluja.

Mr Maliki did not, however, refer to the division of the Sunni tribes into pro- and anti-government factions. His policy of marginalising Sunnis and targeting Sunni leaders has led some tribesmen in the Sunni provinces of Anbar, Salahuddin and Ninevah to protest and fight with Isis instead of against al-Qaeda as they did in 2007-2008.


Isis snipers
Tribal leaders said 25 Isis fighters were killed in an air force strike on the eastern neighbourhoods of Ramadi, while Isis snipers took up positions on rooftops and skirmished with troops in the city.

Backed by alienated Sunni tribesmen, Isis militants held their lines on the outskirts of Falluja and patrolled the centre in captured army and police vehicles flying the black flag of al-Qaeda, while the mainly Shia Iraqi army, supported by pro-regime Sunni tribesmen, surrounded the city.

Ramadi and Falluja are valuable politico-military prizes for the jihadis since many Sunnis deeply resent the US-installed and Iranian-backed Shia-dominated regime.

While tribal Ramadi has resisted Baghdad’s control for decades, Falluja has been for nearly a century the symbol of Iraqi resistance to foreign rule.

Across the border in Syria, Isis was also under strong military pressure. It has been forced to withdraw from towns on strategic insurgent supply routes from Turkey following an attack launched by two home-grown fundamentalist groups, Ahrar al-Sham and al-Qaeda’s official Syrian franchise, Jabhat al-Nusra, both former Isis allies.


Foreign fighters
The western-sponsored Free Syrian Army, Saudi-founded Islamic Front and recently formed Mujahideen Army and Syrian Revolutionaries Front have launched a “revolution” against the Isis in the northern provinces of Idlib and Aleppo. They are demanding that the faction operating in Syria – which is largely comprised of foreign fighters – depart or dissolve into local formations.

Seeking to create an Islamic state in the Levant, the Isis has prompted civilians living in towns under its control to protest against imposition of its harsh interpretation of Islamic law, kidnappings and beheadings of prisoners.

Rival groups have accused Isis of stealing weapons and ammunition as well as clothing and personal belongings.

Meanwhile, the Isis has claimed responsibility for a suicide bombing that last week killed five in a Hizbullah bastion in southern Beirut.


Sunni/Shia divide
Having staged its first strike in Lebanon, the group pledged to carry out other punitive attacks on Hizbullah and its supporters, deepening the divide between Sunnis and Shias.

He said Tehran should not take formal part in the peace conference scheduled to start at Lake Geneva on January 22nd because it had not endorsed a 2012 accord calling for a new Syrian leadership,

However, he said that there might be ways that Iran could “contribute from the sidelines”. – (Additional reporting Reuters)