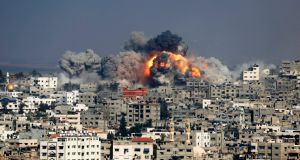 Brazil’s reluctance to accept an Israeli ambassador who is a West Bank settler has set off a diplomatic crisis and led to a standoff with the Israeli government.

The appointment four months ago of Dani Dayan, a former head of the Jewish settlement movement, did not go down well with Brazil’s left-leaning government, which has supported Palestinian statehood in recent years.

“The State of Israel will leave the level of diplomatic relations with Brazil at the secondary level if the appointment of Dani Dayan is not confirmed,” deputy foreign minister Tzipi Hotovely told Israel’s Channel 10 TV, saying Mr Dayan would remain the sole nominee.

Brazilian government officials declined to comment on whether Ms Rousseff will accept the nomination of the Argentine-born Dayan. But one senior foreign ministry said: “I do not see that happening.”

The official, who asked not to be named because he was not authorised to speak on the matter, said Israel would have to choose a different envoy because the choice of Mr Dayan has further worsened relations that turned sour in 2010 when Brazil decided to recognise Palestinian statehood in the West Bank, East Jerusalem, and the Gaza Strip, which Israel captured in a 1967 war and settled.

Israel left Gaza in 2005 but claims East Jerusalem as its indivisible capital and wants to keep swathes of West Bank settlements under any eventual peace deal with the Palestinians.

Tensions rose last year when an Israeli foreign ministry spokesman called Brazil a “diplomatic dwarf” after Brasilia recalled its ambassador from Israel to protest a military offensive in Gaza.

Brazil’s government was also angered by the announcement of Mr Dayan’s appointment by Netanyahu in a Twitter message on August 5th before Brasilia had been informed, let alone agreed to the new envoy as is the diplomatic norm.

Over the weekend, Mr Dayan went on the offensive to defend his nomination, telling Israeli media that Mr Netanyahu’s government was not doing enough to press Brazil to accept him.

Mr Dayan said not doing so could create a precedent barring settlers from representing Israel abroad.

Emmanuel Nahshon, spokesman for Israel’s foreign ministry, said ties with Brazil were “good and important”, noting Israel’s recent opening of a new consulate in Brazil and the business opportunities for Israeli security firms during the Olympic Games to be held in Rio de Janeiro in August.

Israel has a considerable role in providing avionics technology for Brazil’s aerospace and defense industry.

Celso Amorim, a former Brazilian foreign and defence minister, said on Friday that the diplomatic dispute over Dayan’s appointment showed that “it is time the Brazilian armed forces reduced their dependence on Israel.”

1 Aer Lingus staff say they are living in ‘near poverty’ and unable to cover rent
2 Covid-19: Warning of similar measures for other counties as Donegal moves to Level 3
3 Republican leaders reject Trump’s stance on peaceful transition of power
4 Next 10 days critical in fight against Covid-19 in Cork, says adviser
5 Mother refused meaningful access to teenage daughter in ‘profoundly sad’ case
Real news has value SUBSCRIBE