‘Youth of the nation for Euro-integration,’ they cry

To protesters in Kiev, the EU represents freedoms threatened by ties to Moscow 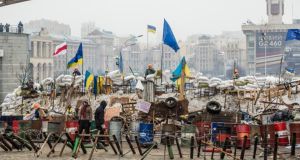 Anti-government protesters continue to fortify their barricades to block the police from forcing them out of Independence Square in Kiev yesterday. Photograph: Brendan Hoffman/Getty Images

As a horde of big men in masks, helmets and black body armour bore down on them in the freezing early hours of Wednesday, protesters in Kiev feared another beating from riot police.

Led by pop stars, priests and politicians on a stage in the middle of Independence Square, the crowd fended off rising fear and biting cold by singing the national anthem and chanting the slogans of their “revolution”.

“Shame! Down with the gang!” they screamed at President Viktor Yanukovich and his government; “Glory to Ukraine! Glory to the heroes!” they shouted, breathing new life into the rallying cry of Ukrainian guerrillas who fought Nazi and Soviet occupiers in the 1940s.

Another slogan, incongruous but equally vehement, is surely unique to this uprising: “The youth of the nation – for Euro-integration!”

These Ukrainians were declaring their commitment to the bruised and battered European Union, or rather to ideals that have become obscured to most of the people who already live there.

“We know it’s not paradise in the EU. And it would be hard for Ukraine, a big and poor country, to integrate in Europe,” says student protester Oleh Bondarenko. “But we are at a crossroads and have to choose. If we go towards Russia things will only get worse. More poverty, more corruption, less freedom. The European way will be hard but it gives hope of a better life. That’s why we are here.”

He was standing on Independence Square – Maidan Nezalezhnosti in Ukrainian – which has been dubbed “EuroMaidan” by participants in what some here are calling their “Euro-revolution”. Smaller EuroMaidans have sprung up in towns and cities across the country, flying the EU banner alongside the blue-and-yellow Ukrainian colours and red-and-black nationalist flags. They took to the streets late last month, when Mr Yanukovich unexpectedly postponed the signing of a political and trade pact with the EU that would tilt Ukraine strongly away from Russia.

Moscow warned it would slash trade with Ukraine if the deal went through, and is offering its neighbour money, cheap energy and a place in a nascent “Eurasian Union” of ex-Soviet states.

‘Civilisational choice’
The rival deals largely relate to trade, but their significance goes much deeper. Twenty-two years after the Soviet empire crumbled, Ukraine must choose whether to return to a Russian-dominated bloc or make a decisive turn to the West. That is why people on all sides are saying this 46million-strong country now faces a “civilisational choice” over its future.

At a conference in Kiev this summer called Orthodox-Slavic Values: The Foundation of Ukraine’s Civilisational Choice, Kremlin leader Vladimir Putin said Russians, Ukrainians and Belarusians shared “spiritual values that make us a single people” and a long history that is “the foundation upon which we can build new integration ties”.

While much of southern and eastern Ukraine feels very close to Russia and trusts Moscow more than Brussels, western Ukraine is linked more strongly to Poland and central Europe. In any case, millions of young people across this country are less interested in history than Transparency International’s recent announcement that Ukraine is Europe’s most corrupt country, coming 144th in a ranking of 177 states; the more corrupt the State, the higher it is ranked. Russia came 127th.

Riddled with corruption
Ukraine has been riddled with corruption since independence in 1991, under pro-EU and pro-Russian governments, but it has got worse since Yanukovich took power in 2010. He has also overseen the jailing of opposition politicians, including former premier Yulia Tymoshenko, a sharp concentration of political and financial power among allies and relatives, and an increase in state pressure on law courts and the media.

To many Ukrainians, these trends show that Yanukovich is already taking his country down a Russian, rather than European, path. His use of riot police convinced many demonstrators that, if these protests fail, a move towards authoritarianism is likely. “The EU wouldn’t let him get away with these things,” says Halyna, a student from western Ukraine.

“But in Russia the situation is even worse – the Maidan couldn’t happen there. Putin would let Yanukovich do what he wants with us.”

The blue-and-gold flags wrapped around snow-dusted shoulders and rippling atop barricades on the Maidan are the same as those flying in 28 states where the EU often seems to signify only discontent over austerity, bailouts, bankers, bureaucracy, immigration and the single currency.

Democracy and tolerance
But here, it means something else: the possibility of more prosperity, freedom, democracy and tolerance, a place where the rule of law generally works, basic rights are usually protected, and life is a little less precarious than in today’s Ukraine.

Those who consider the protesters naive should look at what they see as their country’s alternative – a future tied to Russia, Belarus, Kazakhstan and other ex-Soviet nations, where the individual can be crushed at any time by the state and well connected businessmen.

Ukrainians attempted to switch course with the 2004 Orange Revolution, but lost their way. Now the children of that time are trying again, and have inspired many older people to give change another chance. “Yanukovich only talks about maintaining order and stability,” says Halyna.

“That’s fine for him and his cronies. The rest of us want something new.”