Leader of Freedom party calls for mass demonstrations against government 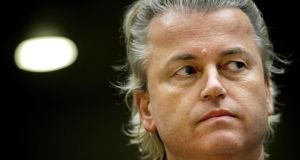 Geert Wilders: As he reinvents himself as champion of the Dutch “squeezed middle”, he claims it is the government’s “subservience” to Brussels which is causing damage to the country’s social fabric. Photograph: Koen van Weel/AP

It was an extraordinarily uncharacteristic outburst from smiling Dutch prime minister Mark Rutte last year, when he snarled at right-wing leader Geert Wilders, who had just brought down his teetering minority government: “I’m going to smash that party of yours, right down to the last seat.”

Wilders had just withdrawn from Rutte’s centre-right Liberal-Christian Democrat coalition in a row over where to find €13 billion in austerity cuts, sparking an unwanted general election in the middle of a recession, so a touch of exasperation may well have been in order. Even so, a sheepish Rutte publicly withdrew the unguarded remark, although not before Wilders had made an appropriate amount of hay over being “threatened”.

The exchange revealed a deep personal antipathy between these two astute politicians and their tacit acknowledgment that the ideological ground on which the battle for the Dutch electorate will be joined for the foreseeable future is Europe.

Immediately after his government’s collapse, Rutte appeared to be making good on his promise to make Wilders and his Freedom Party pay. Just days before the EU deadline, Rutte’s caretaker finance minister, Jan Kees de Jager, succeeded in cobbling together a package of cuts aimed at keeping the country’s budget deficit within 3 per cent of GDP, enough at least to satisfy Brussels.

The electorate then rewarded Rutte with an additional 10 seats for his political determination – and punished a bewildered Wilders for provoking the election, reducing his total by more than one-third.

Now it was Wilders’s turn for the unguarded comment. Immediately after the result, a Dutch journalist called to him that he was “the big loser” of the evening. Wilders stopped, turned towards him in fury, and said slowly and clearly: “I am not a loser.”

Rutte may have won the 2012 election, but the perception 12 months on is that his new coalition with Labour has brought no improvement to a stagnant economy. On the contrary; as other euro zone countries see a hint of growth, the Netherlands remains in a recession which the national statistics office says will continue until the end of the year, at least. Having slashed public services to save €13 billion last year, talks have just restarted on finding another €6 billion in cuts.

All this has convinced Wilders to shift his political emphasis. Gone, for now at least, are the derogatory rhetoric about Islam, the comparisons between the Koran and Hitler’s Mein Kampf and the persistent emphasis on immigration and how it damages rather than benefits the economy.

Wilders is in the process of reinventing himself as the champion of the Dutch “squeezed middle” – claiming it is the government’s “subservience” to Brussels which is causing unnecessary damage to the country’s social fabric.

The strategy appears to be working. A July poll showed for the first time that the Freedom Party would be the largest political party in the Netherlands if an election were held the next day, while just 34 per cent wanted Rutte’s Lib-Lab coalition to complete its four-year term.

Wilders has called for a series of mass demonstrations outside parliament in The Hague, the first of which is expected next month. “People have had enough”, he says. “They are furious with Mark Rutte and his Labour friends.”

It is a strategy on which Wilders believes he may now be able to build his much-vaunted pan-European right-wing coalition, especially with the approach of European elections next spring.

“Next year we can make an enormous advance”, he says. “Parties that are against the elite are growing in popularity across Europe. These are the parties that really support their countries’ national interests and national identities.”

He says his coalition will embrace the National Front in France, the Lega Nord in Italy, Vlaams Belang in Belgium, the Eurosceptic Sweden Democrats and, perhaps, Alternative für Deutschland in Germany – forming, he suggests, a mass movement of the right.

“A political revolution is under way from England to Germany, from France to Italy and the Netherlands. We think the same way about 90 per cent of issues or perhaps more. I have more in common with these parties than with the whole Dutch parliament.”