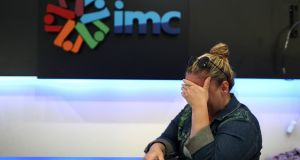 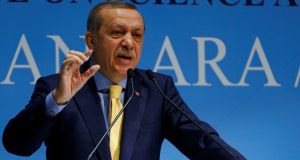 The police headquarters said 12,801 officers, including 2,523 chiefs, had been suspended because of their suspected links to US-based cleric Fethullah Gulen, whom Ankara accuses of orchestrating the attempt to overthrow the government.

Mr Gulen, who lives in self-imposed exile in Pennsylvania, denies any link to the putsch which has shaken the country and led to the deaths of more than 240 people.

The suspensions came hours after deputy prime minister Numan Kurtulmus announced that the cabinet had approved a 90-day extension to a state of emergency, renewing president Recep Tayyip Erdogan’s powers to govern by decree at least until January.

The emergency measures, if approved by parliament, mean Mr Erdogan can take decisions without oversight of the constitutional court, Turkey’s highest legal body.

As well as suspending about five per cent of the entire police force, the authorities detained 33 air force officers in raids across the country, the private Dogan news agency reported, and the transmission of TV station IMC was cut following accusations of spreading “terrorist propaganda”.

State-run Anadolu Agency said 37 people working in the interior ministry’s headquarters had also been removed from their posts, although no explanation was given.

Since July 15th, Mr Erdogan has taken unprecedented steps to rid state institutions of staff deemed disloyal or potential enemies. About 100,000 people in the military, civil service, police, judiciary and universities have been sacked or suspended from their jobs, and 32,000 have been arrested.

The government says its aim is to rid institutions of links to Mr Gulen, whose organisation it calls a terrorist network. Mr Gulen, a former ally of Mr Erdogan, denies any involvement in the coup attempt.

One of the police officers suspended on Tuesday, a 26-year-old man, killed himself in a park in the Mediterranean city of Mersin, Dogan reported.

The relentless crackdown has caused consternation among Turkey’s Western allies and human rights groups, who fear Mr Erdogan is using the unsuccessful coup as a pretext to curtail any dissent, while at the same time intensifying his moves against suspected Kurdish militant sympathisers.

In August, Turkish forces launched an offensive into northern Syria in support of rebels fighting against Islamic State, also known as Isis, creating a security corridor along the Turkey-Syria border that also appears designed to push Kurdish militia away.

Prime minister Binali Yildirim warned on Tuesday that the YPG Kurdish militia, which is backed by the US, was filling a vacuum left by Islamic State and said Turkish forces were prepared to go after Kurdish fighters in the same way.

“We know how to cleanse the PYD/YPG, just as we cleansed Daesh from Jarablus,” he said, referring to Islamic State.

Ankara fears Kurdish militants fighting for greater autonomy in Turkey could benefit from turmoil in the region.

In a further sign of the government’s desire to move rapidly to quell domestic opposition, Mr Yildirim said the country’s judicial process needed to be speeded up, especially when it came to prosecuting those accused of backing the coup.

“One of the main goals is shortening the time it takes to prosecute people,” he said at an economic conference. “We are starting this with the July 15th coup plotters. We are doing this quickly.”

While Turkey cracks down at home and expands its footprint in Syria, it also wants the US to extradite Mr Gulen so he can be prosecuted on charges that he masterminded the failed insurrection.

On Sunday, Turkish counter-terrorism police detained Mr Gulen’s brother in Izmir, where he was staying at a relative’s house. Several of Mr Gulen’s relatives, including a nephew, niece and cousins, have been arrested since July 15th.

While Mr Erdogan’s security clampdown may be bolstering his own authority, it has had economic repercussions, with credit ratings agencies downgrading the country’s debt to “junk” and the Turkish lira weakening against the dollar.

On Tuesday, Mr Yildirim lowered the growth outlook for 2016, saying the economy was likely to expand 3.2 per cent, well below an original 4.5 per cent forecast, while inflation for the year is set to hit 7.5 per cent.