Tensions rise as Lisbon’s immigrants take to the streets 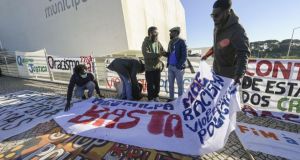 Residents of the impoverished Bairro da Jamaica stage a protest in front of City Hall. Photograph: Corbis via Getty Images

From time to time, cars of curious people drive slowly though Bairro da Jamaica, craning their necks for a peek at the neighbourhood that’s been in the headlines across Portugal for several days now. None of them step out of their vehicles.

They’re here to look at the broken glass, the smashed roof tiles and the evidence of last week’s violence. The tallest of the bairro’s self-built housing towers is now derelict, fenced off with yellow tape and awaiting demolition; the others are also scheduled to be torn down, but are still occupied for now.

“Most of the residents here are just regular people: they go to school, they work, they pay their bills, they pay taxes, they contribute to society like everyone else,” says Liliana Jordão (27), a resident of this neighbourhood on the southern outskirts of greater Lisbon. “But if Bairro da Jamaica already had a really bad reputation, this week it’s been like a zoo.”

It began last week with a scrap between two residents, but it was when the police arrived that the real story kicked off: officers were captured on video beating, pushing and dragging anyone who came into their path.

Filmed by local residents, the video quickly went viral on social media, spreading across the estates and neighbourhoods of the city’s peripheries, where most of Portugal’s black, Afro-descendent population resides.

“When I saw the video, the way they treated those women, I actually wept,” says Jordão. “It could easily have been my mother. And then I thought to myself, no, enough is enough, I have to do something.”

The following day about 300 people, most of them young, black residents of Lisbon’s suburbs, held a spontaneous demonstration in the centre of the city chanting “Stop racist police brutality.” Police responded by firing rubber bullets towards the protesters, with the confrontations resulting in four arrests. Tensions rose from there, with police spokespeople and unions trading accusations of excessive force and institutional racism.

Across the suburbs cars have been set on fire and police stations targeted, as the original call to protest – “There are many Jamaicas” – has echoed across the country, reflecting an urban reality that is rarely discussed in Portugal.

Shanty towns proliferated in Portugal from the 1960s onwards, the combined result of poor urban planning, large-scale migration from the countryside and immigration from the former Portuguese colonies of Angola, Mozambique, Cape Verde, Guinea Bissau and Sao Tome and Principe.

“African immigrants were pushed into thoroughly precarious conditions, often having to resort to building their own homes, illegally, and on the outskirts of the city,” says Antonio Brito Guterres, an urban social worker. “This is where the segregation of Portuguese-speaking African immigrants and subsequent generations began, from the rest of the city.”

The structural problems in Bairro da Jamaica, about 30 years since it was first established, are typical of neglected self-built neighbourhoods: illegal electricity supply, improvised sewage and water arrangements, and inadequate building conditions. “It’s damn cold in the winter and boiling in the summer,” says resident Cândido Guilherme de Almeida Pedro.

After years of being ignored, at the end of 2017 a plan for Bairro da Jamaica was finally agreed as part of the national resettlement programme, the PER (Programa Especial de Realojamento). Launched in Portugal in the 1990s to demolish the shanty towns, the PER approach has been defined by replacing self-built housing with concrete housing estates. Critics say it has replaced slums with ghettos.

A 2017 report by the UN special rapporteur on adequate housing raised concerns about the situation of the African descendent and Roma gypsy (cigano) communities in Portugal, flagging living conditions “that directly threaten a dignified life, which is at the centre of the human right to housing”. It also criticised the detrimental effects – including homelessness – of demolitions and evictions instigated by the PER.

“A lot of those neighbourhoods are seen as ‘sensitive zones’ by the security forces,” says Guterres. “But that doesn’t correlate with crime rates. It’s about racial bias within the police.”

Heavy-handed policing in the suburbs is blamed for the deaths of at least 10 people in the past 15 years – among them 14-year old Elson Sanches in 2009 – and no police officer has ever been convicted in connection with them. Then there is the high-profile case, currently in court, in which 17 police agents stand accused by the public prosecutor of a litany of crimes against a number of young black men and women from the self-built neighbourhood of Cova da Moura, including aggravated kidnapping, falsifying testimonies, racial abuse and assault.

Meanwhile, in 2016, a UN report from the Committee on the Elimination of Racial Discrimination said it remained concerned with racism experienced in Portugal and repeated recommendations that the country adopted specific measures aimed at the African descendent population, who “remain invisible in the most significant positions” in society.

For Almeida Pedro, of the neighbourhood’s housing, and many others, Monday’s demonstration was a long time coming.

“The protest is to do with a lot of things that have been accumulating for a long time. You have lots of young people who want to be part of society but find themselves totally marginalised. What happened here in the bairro was really the last straw,” he says.

“Of course we don’t want war with the police,” adds Jordão. “We need to show them, however, that we have rights – as much as we have responsibilities – and the way they behave needs to change.”

With the new plan to resettle people across the local area, rather than in a purpose-built estate far away, the residents of Bairro da Jamaica hope they will avoid being ghettoised like other communities before them.

But with the continued perceived impunity of the police and the apparent unwillingness of Portuguese security forces to even consider the issue of institutionalised racism, the source of tension between African descent communities in the peripheries of Lisbon and the police will remain. – Guardian