Spirit of defiance prevails on Turkish streets after failed coup 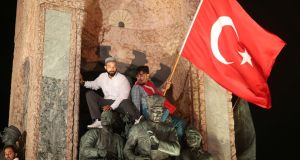 Supporters of Turkish president Recep Tayyip Erdogan sit on a statue of Ataturk, the founder of modern Turkey, as they shout slogans and hold flags during a demonstration against the failed coup attempt, at Taksim Square, in Istanbul on Wednesday. Photograph: Tolga Bozoglu/EPA

On the streets of Turkey, an atmosphere of defiance prevails. Each night since the failed coup rattled the country last Friday, thousands of people have swarmed Taksim Square in Istanbul to voice their support for President Recep Tayyip Erdogan and for their country’s democracy.

People draped in Turkish flags chant slogans against Israel and America, the latter because of a growing perception here that Washington is sheltering the man responsible for the failed insurrection – cleric Fethullah Gulen.

Taksim was three years ago a symbol of defiance against the autocratic president during the anti-government protects centred in nearby Gezi park. Then, the chants were “Tayyip istifa” – Tayyip resign. That’s no longer the case.

Now, the scenes in squares around the country are less of fear or defiance than a celebration and tribute to the president.

Mr Erdogan, having now drawn sympathy and support from some of his biggest critics in Turkey and having fired 60,000 suspected Gulen sympathisers from their jobs in the education, security and judicial sectors, is sitting pretty. Twenty-five television and radio outlets believed to be tied to Mr Gulen’s Hizmet movement have had their licenses revoked.

Authorities were expected to announce emergency measures across the country last night.

“It’s not clear how many people within the military organised themselves [for the coup], but they are a minority,” he told Al Jazeera television in an interview last night.

An article in the popular pro-government Daily Sabah newspaper claims that “The Gulen Movement is an American government-supported project,” while the editor-in-chief of daily Yeni Safak said: “The US administration planned a coup in Turkey through the Gulen terror organisation and tried to cause a civil war, make our people kill each other.” Some foreign journalists reported being struck by nationalist groups in Taksim square.

Last year, Turkey for months dodged and delayed before agreeing to allow the US access to its air bases from which it conducts air strikes in Syria and Iraq; it sought guarantees Washington would not actively support Kurds in Syria, whom Ankara see as a major threat, and even as Isis carried out atrocities, before agreeing.

For now, rights groups say Turkey’s firing of tens of thousands of suspected Gulen supporters may have come too fast and been too broad for it to have judiciously singled out those guilty of involvement in and sympathetic to the rebellion.

“While the government has the complete right to hold to account those involved in the coup, the speed and scale of the arrests, including of top judges, suggests a purge rather than a process based on any evidence,” said Hugh Williamson of Human Rights Watch.

Amnesty International warned against singling out media for particular censorship. “It is vital that press freedom and the unhindered circulation of information are protected, not stifled,” it said.