379 criminal complaints have been filed, 40 per cent of which involve sexual offences 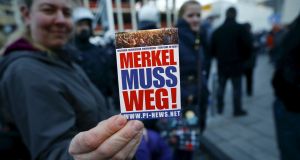 A supporter of the anti-immigration right-wing movement PEGIDA (Patriotic Europeans Against the Islamisation of the West) holds up a sticker for a photo during a demonstration rally in Cologne, Germany on Saturday. The sticker reads “Merkel must go!”. Photograph: Wolfgang Rattay/Reuters

The mass attacks on women in the German city of Cologne on New Year’s Eve have prompted 379 criminal complaints, with investigations focused largely on asylum seekers or illegal migrants from north Africa, police have said.

Around 40 percent of the complaints included sexual offences, including two rapes, police said, as a 100-strong force of officers continued their investigations.

The attacks, mostly targeting women and ranging from theft to sexual molestation, have prompted a highly-charged debate in Germany about its open-door policy to migrants and refugees, more than one million of whom came to the country last year.

“There have been arrests and we will continue to make arrests,” a spokeswoman for the Cologne police said on Sunday. She said police had increased the number of officers on patrol.

“It is then to be determined whether or not these people were involved on New Year’s Eve.”

In an earlier statement, the city’s police had said the suspects in the focus of their investigation “come largely from north African countries” and the investigation “concerns largely asylum seekers and people who are staying in Germany illegally”.

Gathering evidence is difficult, given the chaotic and crowded scenes on the night, when police were overwhelmed by the mass assaults.

The attacks triggered demonstrations in Cologne on Saturday, one of which was organised by the anti-Islam PEGIDA movement.

The far-right has seized on the alleged involvement of migrants in the Cologne attacks as proof that German chancellor Angela Merkel’s welcoming stance to migrants is flawed.

Some in that crowd threw bottles and fire crackers at officers, and riot police used water canon to disperse the protesters.

While the New Year’s Eve attacks happened mainly in Cologne, there were also similar assaults in other cities, including Frankfurt.

Separately, police in North Rhine-Westphalia said that a man shot dead as he tried to enter a Paris police station last week wielding a meat cleaver and shouting “Allahu akbar” (God is Greatest) had lived in Germany.

Police said he had an apartment in an accommodation centre for asylum seekers in Recklinghausen, north of Cologne. The original information came from French security authorities.

A German newspaper Welt am Sonntag reported that the man had painted the symbol of Islamic State on the wall of his flat and had been registered multiple times in Germany under fake names and many nationalities from Syrian to Moroccan.