Ségolène Royal resists being frozen out with North Pole assignment 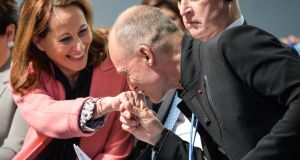 When an English-speaking politician loses an election, he or she usually leaves public life. Not in France, where politicians appear to be indestructible.

Take Ségolène Royal, for example. Royal was the failed Socialist presidential candidate a decade ago, after having been the partner of François Hollande for 27 years. When her erstwhile romantic rival was replaced in Hollande’s affections by an even younger woman, Royal staged a comeback. As president, Hollande appointed her minister of the environment.

Royal wanted to be head of the United Nations Development Programme when the post became vacant earlier this year. She was passed over, perhaps because she had made critical comments about “inadequate” UN negotiations on climate change. Or perhaps word of Royal’s fierce turf battles with then foreign minister Laurent Fabius and French negotiator Laurence Tubiana during France’s presidency of the Cop21 climate conference reached UN headquarters.

Then, according to the cover story published by Paris Match magazine on Thursday, Royal left the environment ministry “disappointed and even hurt not to have been called” by President Emmanuel Macron to be his special envoy for the planet.

Instead Macron made Royal his “ambassador for the North and South Poles”, a post that had been created for the late former prime minister Michel Rocard. The humorist Matthieu Noel speculated on Europe 1 radio on Thursday: “You guess right away that Macron asked himself, ‘Where could I send her, as far away as possible? The North Pole! Let’s go!’ ”

So, yet again, “Ségolène” is back in the news. In Match’s retouched front-page photograph, the 64-year-old mother of four wears a red down jacket with fur trim and a snow cap. She affectionately pets a Taimyr sled-dog, which, Match tells us, is a species in danger of extinction. “Ségolène Royal, the survivor. She’s still here! Her new mission,” gushes the headline.

Readers of the magazine are treated to eight glossy pages of Royal roasting a reindeer sausage inside a log hut, being pulled by six dogs in an amphibious sleigh, walking in the Arctic forest and waiting to see the aurora borealis with a team of scientists. “The only thing missing is a meeting with Father Christmas,” Noel noted.

Royal will attend an international summit in Paris on December 12th to mark the second anniversary of the Paris climate accord. She may receive a frosty reception from her successor at the environment ministry, Nicolas Hulot.

Hulot is a former television journalist whose programme Ushuaia on the wonders of the planet made him a household name in France. In her interview with Paris Match, Royal couldn’t resist a few barbs in Hulot’s direction. She accused him of having backed down on nuclear energy and use of the herbicide glyphosate, due to “a lack of political will ... I didn’t sacrifice five years of my life to see it all unravelled,” Royal said.

Not shy, not retiring

The annoyance appears to be mutual. Le Point magazine reports that Hulot is fed up with the advice Royal proffers through media, for example to “stand firm” on the banning of glysphosate. He accuses Royal of “permanently inundating” his two junior ministers with text messages.

“Ambassador responsible for the north and south poles is obviously not a full-time job, if you judge by the time she spends on politics,” Hulot says. “I imagine it’s very hard to have been minister and not to be it any more.”

Royal has outlived politically almost all the male politicians who tried to defeat her. In 2000, then prime minister Lionel Jospin thought he could sideline her by making her minister for the family. She instead used the post as a launching pad for her own notoriety.

The French explorer Gilles Elkaim, one of Royal’s guides in the Arctic, said exploration was a state of mind. “A little like politics,” Royal responded. “There are those who resist and those who collapse ... My new-found freedom is not a one-way ticket. I haven’t retired.”

Royal does not exclude founding a start-up company, becoming a political commentator on television or returning to government. She would reportedly like to be foreign minister. The 17 million votes she won 10 years ago in the presidential election are, she adds, her “indestructible capital”.