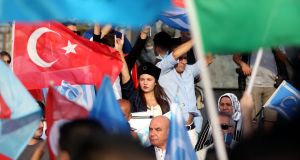 Turkish protestors hold Turkish and Turkmen flags as they shout slogans against Kirkuk for taking part in the Kurdish referendum during a demonstration in Istanbul, Turkey on Sunday. Photograph: Erdem Sahin/EPA

Iran halted flights to and from Kurdish regions in northern Iraq yesterday in retaliation to a plan by the autonomous Kurdistan Regional Government (KRG) to hold a referendum on independence. It also started wargames at the Kurdish border.

The air embargo is the first concrete retaliatory measure against today’s Kurdish referendum which is rejected by the government in Baghdad and by Iraq’s powerful neighbours, Iran and Turkey.

Iranian authorities stopped air traffic to the international airports of Erbil and Sulaimaniya, in Iraqi Kurdistan, upon a request from Baghdad, Fars News Agency said.

Tehran and Ankara fear the spread of separatism to their own Kurds. Iran also supports Shi’ite groups who have been ruling or holding key security and government positions in Iraq since the 2003 US-led invasion which toppled Saddam Hussein.

“Turkey will never ever tolerate any status change or any new formations on its southern borders,” Turkish Prime Minister Binali Yildirim said. “The KRG will be primarily responsible for the probable developments after this referendum.

The KRG has resisted calls to delay the referendum by the United Nations, the United States and Britain who fear it could further destabilise the region.

The vote, expected to result in a comfortable “yes” to independence, is not binding and is meant to give the KRG a legitimate mandate to negotiate the secession of the autonomous region with Baghdad and the neighbouring countries.

Iranian State broadcaster IRIB said military drills, part of annual events held in Iran to mark the beginning of the 1980-1988 war with Iraq, were launched in the Oshnavieh border region.

The war games will include artillery, armoured and airborne units, it said.

Clashes with Iranian Kurdish militant groups based in Iraq are fairly common in the border area.

The US embassy in Iraq cautioned its citizens that there may be unrest during a referendum, especially in territories disputed between the KRG and the central government like the multi-ethnic oil-rich region of Kirkuk.

Three Kurdish Peshmerga fighters were killed and five wounded on Saturday when an explosive device blew up near their vehicle south Kirkuk, security sources said.