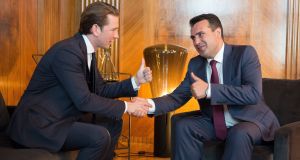 Macedonia’s main opposition party has filed treason charges against its prime minister, Zoran Zaev, for agreeing a historic deal with Greece to change his country’s name.

The deal signed last month would see the ex-Yugoslav republic adopt the name North Macedonia, in exchange for Greece lifting its objections to Macedonia launching talks to join the European Union and Nato.

The issue has poisoned relations between the Balkan neighbours since Macedonia gained independence in 1991, because Athens said that its use of the same name as a province in northern Greece implied territorial designs on that area and a claim to the legacy of Alexander the Great, the storied ruler of ancient Macedon.

Western powers have warmly welcomed the deal but it is fiercely opposed by nationalists in Greece and Macedonia, and still faces potentially difficult hurdles in both countries before it can come into force.

The nationalist VMRO-DPMNE party said it had filed charges including treason and abuse of office against Mr Zaev, his foreign minister Nikola Dimitrov and parliamentary speaker Talat Xhaferi “and all those deputies who voted for this capitulatory, unconstitutional and unlawful agreement with Greece”.

Deputies from VMRO-DPMNE – which was ousted last year after a decade in power – abstained from a parliamentary vote on Thursday in which the deal was approved for a second time.

President Gjorge Ivanov, an ally of the nationalists, refused to sign the deal after it was first ratified last month.

After the second vote he cannot legally block the agreement but he is likely to maintain his refusal to sign it, stoking political tension ahead of a referendum on the name change that is expected to be held in late September or early October.

The referendum will be hotly contested, and the deal also obliges Mr Zaev to pass changes to the Macedonian constitution, a move that requires a bigger majority than he currently enjoys in parliament.

The deal has split the governing coalition in Greece, where prime minister Alexis Tsipras must also secure backing for the agreement from a deeply divided parliament.

During a debate in the chamber last month, a deputy from the far-right Golden Dawn urged the military to stage a coup and arrest Greece’s leaders to prevent the deal going through; he has since been expelled from the party and charged with treason.

By contrast, the EU, US and most of the countries’ neighbours have hailed the agreement, and Macedonia hopes to receive a formal invitation to start membership talks with Nato at its summit next week.

US vice-president Mike Pence congratulated Mr Zaev and Mr Tsipras by telephone on Thursday evening, and praised their leadership and courage in reaching a deal that he said would strengthen peace and stability in the Balkans.