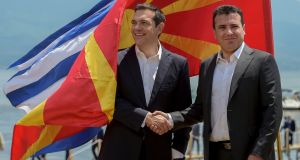 Greek prime minister Alexis Tsipras (left) and Former Yugoslav Republic of Macedonia’s prime minister Zoran Zaev after their arrival on the Macedonian side of the Lake Prespa for a celebratory lunch. Photograph: EPA/Nake Batev

Macedonia has signed a historic agreement with Greece to change its name and end 27 years of rancour despite nationalist-led protests in both countries from opponents who vow to prevent implementation of the deal.

In Sunday’s scenic and symbolic ceremony at Lake Prespa which straddles their shared border, the Balkan neighbours signed a pact that will see the country renamed as North Macedonia.

In return Greece will drop objections to the country’s bid to join the European Union and Nato, having blocked it in protest at the use of the moniker “Macedonia”, which Athens says implies a claim on the northern Greek region of the same name.

However, the deal requires approval in a parliamentary vote in both states, and in a referendum in Macedonia, and political and public opposition is significant. Thousands of people protested over the weekend in Greece and Macedonia, and the government in Athens had to survive a no confidence motion on Saturday.

Greek prime minister Alexis Tsipras called the deal a “brave, historic, and necessary step for our peoples” after seeing the agreement signed by his foreign minister Nikos Kotzias and Macedonian counterpart Nikola Dimitrov.

“We are here to heal the wounds of time, to open a path for peace, friendship and growth for our countries, the Balkans and Europe, ” he added, as senior EU and United Nations officials observed the ceremony on the Greek side of Lake Prespa.

“We will be partners and allies...We must build the foundations for mutual co-operation, friendship and joint effort in the interest of all,” declared Macedonian premier Zoran Zaev.

As the signing ceremony took place and the delegations then crossed the lake to the Macedonian shore for a celebratory lunch, several thousand people were demonstrating against the agreement in a Greek town about 40km away.

Police reportedly fired tear gas at rock-throwing protesters amid claims from some Greek parties that the deal – under which the language and people of North Macedonia would still be called “Macedonian” – makes too many concessions to Mr Zaev’s government in Skopje.

Macedonia’s main opposition party, the nationalist VMRO-DPMNE, held a rally of its own on Sunday in the town of Bitola near the Greek border to protest against any change to its constitutional name.

Mr Zaev’s Social Democrat-led coalition ousted VMRO-DPMNE last year to end its corruption-plagued decade in power, but it is still influential and enjoys the support of Macedonian president Gjorge Ivanov; he has denounced the deal with Greece but cannot ultimately block it.

The signing ceremony was particularly sweet for US diplomat Matthew Nimetz, who has served as the UN’s special envoy on the name dispute since 1999.

He called the deal “fair, honourable and workable”, and described it as “an example...that two neighbours can solve a problem if they really work at it”.

“Today is my birthday,” added Mr Nimetz, who turned 79 on Sunday. “I told my family this year I don’t need any gifts because two prime ministers are going to give me a big gift.”