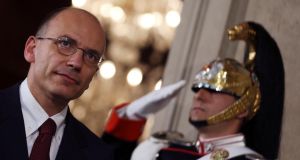 Italy’s two month long political stalemate appears to have finally ended following the announcement this evening that Democratic Party (PD) No 2, Enrico Letta has managed to form a new government, due to be sworn in by president Giorgio Napolitano tomorrow morning.

As expected, in the wake of an inconclusive February general election result, Mr Letta has put together a broad PD-PDL coalition, supplemented by technocrats such as the governor of the Bank Of Italy, Fabrizio Saccomani and former prefect Anna Maria Cancellieri who also served in the outgoing government of Mario Monti.

Given the extremely difficult circumstances in which this government has been formed, in the wake of a presidential election badly botched by the PDs last week, 46-year-old Mr Letta has tried valiantly to put a brave face on matters. For a start, seven of his 21 ministers are women, a female presence of record proportions by Italian standards. For a second, the average ministerial age is 53, compared to an average age of 64 for the Monti government.

Furthermore, his integration minister is the 49-year-old Congolese immigrant Cecile Kyenge who thus becomes the first black woman to hold a cabinet post. Mr Letta has also appointed the former European commissioner, radical and feminist activist, Emma Bonino, as his foreign minister. Intriguingly, too, the former Olympic rowing gold medallist, Josefa Idem, an athlete who competed in eight consecutive Olympics from Los Angeles ’84 to London 2012, has been named sports minister.

On the realpolitik front, Mr Letta has bowed to the inevitable, appointing PDL party secretary, Angelino Alfano, as both minister of the interior and as his deputy prime minister. Other PDL figures appointed to cabinet include Maurizio Lupi as transport minister, Beatrice Lorenzin as health minister and Nunzia De Girolamo as minister of agriculture.

Significantly, though, Mr. Letta has ensured that three of the most delicate posts - the Ministries of Finance, Justice and Foreign Affairs – did not go to representatives from either of the two main parties. Bank of Italy governor Saccomani will serve at Finance, Ms. Cancellieri moves from the Interior Ministry to Justice, whilst, of course, the new Foreign Minister is the highly experienced, often innovative Emma Bonino. Justice Minister Cancelleri, for example, is likely to find herself at the centre of major polemics if the PDL pushes for any sort of judicial “amnesty” regarding the judicial problems confronting PDL leader Silvio Berlusconi.

The media tycoon will have no formal role in this government. Ostensibly, this is because his presence would have proved totally unacceptable to the PD faithful. In reality, Mr Berlusconi’s exclusion could prove to be an advantage for him, giving him the freedom to change his mind and withdraw his support, rather in the manner in which he withdrew his support from the Monti technocrat government just before Christmas.

Many commentators argue that this government may prove shortlived, lasting 18 months to a year. The vastly contrasting political visions of its coalition components would suggest that failure, sooner or later, is a certainty.

In the meantime, however, Mr Letta will hope to make progress on three fronts. In particular, he has said that he hopes his government will provide a guarantee of stability for Italy’s ailing economy, will be able to stimulate growth and reduce unemployment and will also be able to introduce badly-needed electoral reform. The road in front of him is rising all the way.