Lara Marlowe: Grieve for Paris, yes, but without self-pity

We see death on an industrial scale, but we are selective in our compassion

France's President Francois Hollande and Parisiens at locations across the city hold a one minute silence to remember the victims of the attacks which killed 129 people. Video: Reuters 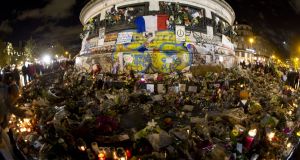 It is possible to love a place the way one loves a person, and everyone loves Paris: tributes at the base of the Monument a la Republique at the Place de la Republique square. Photograph: Joel Saget/AFP/Getty Images

In the hours and days that followed the killing of 130 people in Paris on November 13th, I received an unprecedented number of texts and emails from friends and relatives who feared I might have been caught in the massacres. I was touched and amused. The odds were greater I’d be run over by a bus.

The well-meaning messages seemed to assume I was on the verge of collapse at seeing my beloved Paris attacked with such ferocity. I went to the Bataclan concert hall, where 89 people were killed, walked the streets, talked to people. And I wondered at my own lack of emotion.

Of course, there were chinks in my armour. A few days after the massacre, the evening news began with a photomontage of the victims. I held back a sob.

The radio journalist Antoine Leiris lost his wife, Hélène Muyal-Leiris, at the Bataclan. He wrote an open letter to her assassins, which was widely published by French media.

“On Friday night, you stole the life of an exceptional being, the love of my life, the mother of my son; you will not have my hatred,” Leiris wrote.

When he finally saw his wife’s body in the police morgue, “She was as beautiful as when she went out on Friday night, as beautiful as when I fell madly in love with her more than 12 years ago. Of course, I am devastated with grief. I concede that small victory to you. But it will be of short duration.”

Only a heart of stone would not be moved by Leiris’s short text, his determination to raise his 17-month-old son to be “happy and free”.

But we are selective in our compassion. Some 2,200 Palestinians were killed in Israel’s 2014 assault on Gaza, nearly 17 times the number of people killed in Paris. If no man is an island, why aren’t we grieving for the 19 people massacred in a Bamako Hotel on November 20th? Or the 44 killed in Beirut on November 12th? Or the 224 Russians whose plane was blown up by Islamic State on October 31st?

When asked what he thought of western civilisation, Mahatma Gandhi allegedly replied, “I think it would be a good idea.” Terrorist attacks bring out the arrogant streak in world leaders. Nine days after 9/11, George W Bush told a joint session of Congress: “They hate our freedoms.” Freedom to kidnap and torture through the practice of “rendition”? Freedom to destroy Iraq and plunge the Middle East into chaos?

I couldn’t help hearing an echo of GWB in President François Hollande’s speech at Versailles last Tuesday. Islamic State “fights us because France is a country of liberty, because we are the country of the Rights of Man”, Hollande said.

A poll conducted for Le Figaro and RTL after the attacks showed 84 per cent of French people are willing to accept limits on their civil liberties in exchange for greater security. The government is in the process of legalising searches without warrants beyond the three-month state of emergency. Marine Le Pen’s National Front is poised to win multiple regions in December 13th elections. All victories, I fear, for the jihadists.

Had the attacks occurred in Mulhouse or Roubaix, or in another European capital, they would not have had the same resonance. It is possible to love a place the way one loves a person, and everyone loves Paris.

As Maurice Chevalier sang during the second World War, “Paris will always be Paris/The most beautiful city in the world.” We need her special genius for creating beauty and conviviality. That will not change.

Of the many possible reactions to the attacks, Antoine Leiris’s was closest to my heart. Refuse to hate. Refuse to be angry. Continue life as normal.

In the aftermath of 9/11, the Polish poet Adam Zagajewski wrote a poem titled Try to Praise the Mutilated World. I’ve read it many times this week: “You’ve seen the refugees heading nowhere, /you’ve heard the executioners sing joyfully./You should praise the mutilated world.”

Grieve for Paris, yes. But without self-pity, and without ever losing sight of the millions who have suffered longer and in greater numbers. And yes: we must try to love the mutilated world.