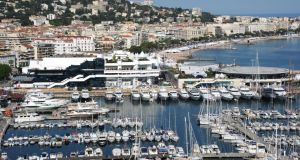 Jewels worth an estimated €40 million have been stolen from an exhibition in the French resort of Cannes, according to reports.

A gunman walked into the luxury Carlton hotel in broad daylight and reportedly headed for a specialist diamond stand in the exhibition.

According to the local newspaper Nice Matin, the thief stuffed a suitcase with gems that were being shown by the prestigious Leviev diamond house, owned by the Moscow-based Israeli billionaire Lev Leviev.

The Carlton hotel is on the exclusive Promenade de la Croisette that stretches a mile and a half along the French Riviera.

Jewellers and fashion houses often use the glamorous resort as a location to showcase their wares. Gowns and accessories are loaned to celebrities during the Cannes film festival and are photographed on the famed red carpet and at parties along the palm-lined Croisette waterfront.

This morning’s theft is not the first to take place this year.

In May, a diamond necklace worth €2 million disappeared during a star-studded party at the Hotel Du Cap-Eden-Roc. The piece, belonging to upmarket Swiss jeweller De Grisogono was part of a collection paraded by 20 models at the event.

Sharon Stone and Paris Hilton were among the guests. Eighty bodyguards, local police, hotel security, and other staff had been on duty but when a check was made at the end of the night the diamond necklace was missing.

Another Swiss jeweller, Chopard, had gems worth $1.4 million stolen in the first week of the 12-day film festival.

Police said the Chopard jewellery had been in the safe of a room at the Suite Novotel hotel in central Cannes, which had been rented by an employee of the jeweller.

The entire safe was removed from the wall and taken during the night of May 16th. Someone entered without forcing the door or using the magnetic key card, a police source said.