Political integration must deepen at an even faster pace than previously 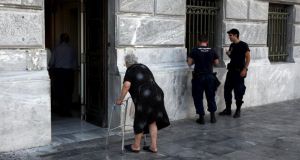 Pensioner arrives to receive part of her pension as police officers stand by at a National Bank branch in Athens, Photograph: Reuters/Yiannis Kourtoglou

After marathon negotiations lasting 17 hours, and with the eyes of the world upon them, euro zone heads of government finally emerged into the Brussels daylight on Monday and proclaimed “unanimous agreement” on a Greek funding accord.

The statement, potentially, brings to an end six months of brinksmanship, bluster and bedlam across the euro area, whereby the grandstanding theatrics of a novitiate Syriza government left a befuddled Hellenic Republic at the point of rupture with its single currency partners.

Although the early-July referendum may have been a domestic political triumph for Prime Minister Tsipras, it epitomised the trust betrayal that had progressively poisoned his relationships with euro zone peers. Now, with that trust foregone and his credibility in tatters, Tsipras has been left to choose “between a bad choice and a catastrophic one; we are forced to opt for the first one”.

Tsipras has failed his country, to the extent that the funding-for-reform package now on the table is considerably tougher on the Greek populace than that which could have been delivered in more collegial circumstances over the past six months. Moreover, a shuttered banking system and that wholly avoidable national humiliation of a missed IMF loan repayment will not read kindly in his political epitaph, nor will unseemly fast-tracking of enabling legislation to prevent non-implementation of political agreements by a grievously discredited Prime Minister.

For all that, Tsipras is already brandishing the avoidance of “Grexit” as his badge of honour, averting “the most extreme plans of the most extreme conservative forces in the European Union”, whilst also trumpeting that “in this hard battle, we managed to win debt restructuring and certain financing for the medium term”. Lack of alternatives renders the Tsipras leadership unassailable for now, although he may require some new dance partners for his coalition government, the rupture with closet-Grexit extremists in his Syriza party now gone beyond the beyond.

A rupture to Syriza may cause some local tremors, but a rupture to the euro currency would have proved altogether more seismic. Such was the collective antipathy to the Greek deceptions of recent weeks that an EMU “time-out” proposal (Grexit by any other name) for a recalcitrant Hellenic Republic was formally tabled by an exasperated German finance minister.

For French President Hollande, this was an appalling vista, flying in the face of “our conception of Europe”, whereas for Dr Merkel, there could not and would not be “an agreement at any cost”. In the event, compromise was reached on the creditor stance, the “irrevocable” euro passed its most acute stress-test to date, and the “collective failure” feared by European Commissioner Moscovici was duly avoided.

As part of its obligations under a prospective €82-85 billion “bailout” programme covering 2015-2018, the Greek government is resolved “to fully normalise working methods with the institutions, including the necessary work on the ground in Athens, to improve programme implementation and monitoring”.

The institutions (aka Troika) have been the subject of particular vitriol by the Syriza party, its “Hellenic Debt Truth Committee” having concluded last April that Greece should repudiate Troika loans on the basis that they were “illegal, illegitimate and odious”. This was disingenuity run riot. Before the Troika darkened their doors in mid-2010, Greek debt/GDP was already 130 per cent, Deficit/ GDP was 15.5 per cent, gross financing needs were 23 per cent of GDP, and market funding access was effectively denied by surging bond yields.

The Troika era extended a funding security blanket over Greece’s unavoidable fiscal consolidation efforts, thereby protecting the nation from even more swingeing austerity and social upheavals than would otherwise have occurred if sacrificed at the alter of bond market vigilantism.

Furthermore, debt sustainability was progressively supported, not only by that €100 billion PSI in 2012, but also by exceptionally generous servicing tenors (ultra-low interest rates, ultra-long maturities, grace periods etc) that pertain to this day.

Although Greek debt/GDP is ostensibly the most burdensome in Euroland at 177 per cent in 2015, its annual interest bill is barely €6 billion (3.2 per cent of GDP), well below servicing burdens of numerous euro zone sovereigns, Ireland included. Clearly, debt sustainability is as debt sustainability does, albeit a churlish Syriza preferring to bite the hand that feeds.

If the two Troika programmes in Greece to date have “failed”, it is not because of austerity (which was obligatory in any scenario) or an undue burden of sovereign indebtedness (au contraire). Rather, it was because a plethora of agreed supply-side reforms, necessary to revitalise Greek recovery potential and thereby help the economy grow its way to debt sustainability, were simply never implemented.

Instead, successive Greek governments chose to “free ride” on the kindness of strangers, rather than take ownership of their singular economic problem, viz torpid growth performance. Fiscal surpluses and debt reprofiling may be necessary conditions for Greek debt sustainability, but they are far from sufficient. Sufficiency stems from pro-growth structural reforms, reinforced by the mobilisation of €35 billion under various EU investment programmes to jointly kick-start a sclerotic economy. Small wonder that the summit statement majors on that vital pre-condition for any “bailout” programme, viz “ownership by the Greek authorities is key, and successful implementation should follow policy commitments”.

Greece was, is and will remain sui generis, the weakest link in the single currency chain, an “exceptional and unique” challenge to the Euro Group, and likely requiring “exceptional and unique” solutions for some time to come. Leading politicians have measured up to the latest challenge in this respect, thereby avoiding the first serious backwards step in the long history of post-war European integration.

EMU is no longer the sub-optimal currency zone of its birth, but neither has it reached optimality; it remains a currency union bereft of fiscal or political union, the latter necessary to eradicate all semblances of democratic deficits in the governance of the single currency area.

If there is any abiding takeaway from the regrettable events of the past six months, it is surely that political integration must deepen at any even faster pace than heretofore, such that the region’s citizens may develop a unity of identity and common purpose that bestows solidarity in times of crisis and equal opportunities in times of plenty. The euro zone must become a Euroland, for the Greeks, and the Germans, and everyone else in between.