Greece would have done better to have exited

Greeks face reality as pharmacies are closed and train drivers strike over further austerity measures, ahead of a crucial vote in the country's parliament on whether to accept the conditions of a third bailout package. Video: Reuters 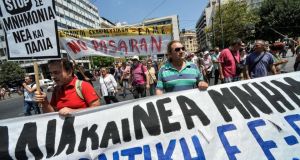 A cut too far ... Protestors hold a banner during a protest march in central Athens yesterday marking a 24-hour public sector worker and pharmacists strike against the new package of austerity measures. Photograph: Andreas Solaro/AFP/Getty Images

The crisis in the euro zone was fundamentally an ethical crisis triggered by corporate capitalism and detonated within a deeply corrupt business model in banking. Greece, for all its policy failings, is a victim of this same, essentially unreconstructed ideology.

The bailout “reforms” the eurogroup seeks to impose on Greece are now being discussed before the Greek parliament. They are based on the deeply destructive economics of austerity. This approach to correcting macroeconomic imbalances of the nature, and scale of, the post-2008 crisis is not supported by evidence – not in the euro zone generally and not in Greece. They are certainly not vindicated by the experience of countries that have been at the sharp end of its economic nihilism.

In Ireland, the casualties of the “reforms”, in the form of broken lives and businesses, as well as sovereign and household indebtedness extending across three generations, have been swept under the bed. The room just seems tidy – unless you know where to look.

The pernicious “bailout” imposed on Greece was ratified by busily nodding euro zone politicians, few of whom show any grasp of the realities of life outside of the perpetual circus of hugely expensive “crisis meetings”. These are politicians who press the flesh and avert their eyes from the reality of what they are doing – then quickly escape into the comfort zone of their “briefing notes”. History is full of them.

There is hardly a democrat worthy of the name in Europe who has not felt a flush of embarrassment at what has been perpetrated in their name on Greece. There is too much rigorous analysis – too much evidence of hardship – to prove that what is unfolding is not primarily the responsibility of feckless Greeks. The accountability lies elsewhere.

Germany’s insistence on the imposition of vengeful “reforms” on Greece’s broken- backed economy makes no economic sense. The argument that hardworking German people who pay the piper are entitled to call the tune is facile.

The greater the austerity imposed on Greece, the less its capacity to repay. It is already running a primary surplus, which highlights an unprecedented fiscal turnaround, reflecting the depth and scale of cuts in health and social solidarity. The economy has tanked.

All of this highlights the asymmetrical nature of adjustment in the euro zone, a feature to which economists have long pointed as a basic flaw in the design and workings of the system.

In any event, the idea that, as principal paymaster, Germany is entitled to set conditions does not extend to disenfranchising the Greek people or, effectively, evicting Greeks from their own parliament. The troika is shot through by serious policy divisions. For example, the stance embedded both in the measures themselves, and in the tone of the eurogroup, does not reflect the position taken by the IMF.

This is important. It has been the case pretty well from the outset that the International Monetary Fund has allowed itself to be press-ganged into providing covering fire for the euro zone.This policy divide has been evident in Ireland, where the IMF’s approach has sometimes been very different to that imposed by the ECB and former EU commissioner Olli Rhen.

There are deep divergences in terms of, for example, debt sustainability and the scale of debt relief required by Greece from the European institutions. Well, let’s be clear: from Germany and the IMF.

Some questions arise: Whose analysis is correct, and to what extent has the political animus of the troika infected the perspectives of fiscal adjustment and governance in a battered, dependent economy? This is relevant because, in the early stages of Greece’s travails, there were reports (swiftly retracted) of sending in a “special commissioner” to take over the tattered remains of government decision-making in Athens. This talk has resurfaced with a vengeance.

What, then, is one to make of Ireland’s stance? Greece is, after all, a small(ish) country and one whose culture stretches back millennia. Like Ireland. It is a country that has known occupation, been knocked around and misused by domestic political forces and the dark powers of global financial markets, as Joe Stiglitz has so well chronicled in his book Freefall. Just like Ireland. And, like Ireland, Greece has been eviscerated by austerity, indebtedness and emigration. There is a shared strong strand of Christianity .

So, some empathy might have been expected. But we don’t do empathy anymore – we are much better at clichés that have to do with “doors being open” and “tables” just waiting to be sat around.

Greece would have done better to have exited. The euro zone would have done better to have facilitated and supported such an exit. Now Greece is shackled by more oppressive debt without any of the benefits of using exchange-rate adjustment, alongside structural and supply- side policies, to facilitate adjustment. The Greeks were spooked – just as Ireland was spooked.

Globally, the banks are “returning to profitability”. The Greek people are screwed. The vulture capitalists are already circling Athens.