‘Frexit’ to be major issue in French 2017 presidential campaign 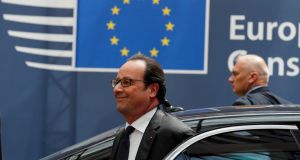 In the wake of the Brexit vote, French leaders appear to be infused with a quixotic belief that they can save Europe.

“France has a particular responsibility because she’s at the heart of Europe,” president François Hollande said in his first public remarks after the referendum results were announced. “Because France wanted Europe, because she built Europe.”

New “initiatives to relaunch Europe” are announced daily by presidential hopefuls. Proposals by Hollande in Berlin and Brussels this week, and by prime minister Manuel Valls in the National Assembly on Tuesday, would make Europe more like France, with stronger social protection, higher taxes and more robust defence.

No one has explained why France’s European partners would be more receptive to such proposals now than they have been in the past, though Hollande is seeking to consolidate a social-democratic front within the EU.

Investment, growth, job creation and fiscal and social harmonisation have been constant elements of official French discourse on Europe for years, and they are at the core of post-Brexit rhetoric. They figured prominently in a joint statement by the leaders of France, Germany and Italy on Monday night.

There is a consensus among mainstream French politicians on strengthening the governance of the euro zone, trade protectionism and on ending negotiations for Turkish accession.

The Brexit vote ensured that French participation in Europe will be a major issue in next year’s presidential election. Marine Le Pen, the leader of the extreme right-wing Front National, could not have wished for a better present.

In her exuberant post-Brexit speech, Le Pen said her party’s “clear-sightedness” regarding the British vote “gives us greater legitimacy to carry this debate in France”.

Le Pen gloated when Hollande offered her the added gift of a photo opportunity on the steps of the Élysée Palace, by inviting her to his consultations with party leaders. She got another chance to appear presidential yesterday when the New York Times published her opinion piece on the British “act of courage”.

Though her demand for a referendum is firmly rejected by the parties of government, the spectre of a “Frexit” now hangs over France. “Will the EU still exist in 10 years?” Fillon asked in the National Assembly debate.

Valls and Bruno Le Roux, the socialist group leader, both reminded the assembly that France “saved” Greece during the debt crisis. “Even if everything isn’t settled,” Valls said, Greece is “doing better and is grateful to France. Saving Greece was already saving Europe!”

In the immediate aftermath of the Brexit vote, French commentators expressed confidence that the “Franco-German engine” would resolve the crisis. Together, the two countries represent a third of the population of the EU and nearly half of the GNP of the euro zone.

But German chancellor Angela Merkel seemed to signal an end to her exclusive relationship with Hollande when she invited the Italian prime minister, Matteo Renzi, to their dinner on Monday night.

As French commentators often point out, Britain had a profound influence on the EU’s free-trade, liberal economic bias, which is widely blamed for popular disillusion with the EU. The French have struck a harder line than Merkel, especially on the necessity of a rapid British departure.

“Europe needs clarity,” Valls said yesterday. “You’re either in or you’re out . . . Since January 2013, Europe has been hanging on the British decision. We showed patience and understanding.

“There should be no ambiguity, because we need stability, in particular on the financial markets. The British Conservative Party should not be allowed to impose its agenda.”

Fillon wants the “divorce” to be concluded by late September. “Until then, British MEPs should no longer be allowed to vote, and British civil servants in Brussels should not be allowed to participate in decision-making,” he said.

“We must strengthen the euro zone and its democratic governance,” Valls said. “We need a budget and a parliament for the euro zone.”

Valls twice referred to the Front National. He warned that leaving Europe would weaken France vis-a-vis globalisation, migration and the fight against terrorism.

As for the Le Pen’s demand for a referendum on leaving Europe “We’ve seen what happens when people play sorcerer’s apprentice,” Valls said.

“I want to be even more clear: through a referendum, the Front National is pursuing a single objective, to take France out of the EU and out of history . . . What a twisted vision of patriotism!”