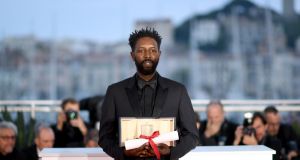 Director Ladj Ly after he shared the Jury Prize for Les Misérables at the 72nd edition of the Cannes Film Festival, France. Photograph: Loic Venance/AFP via Getty

The French director Ladj Ly was preparing to shoot his first full-length feature film, about the immigrant neighbourhood where he grew up and where he still lives, when France won the World Cup on July 15th, 2018.

Ly gathered his cast and crew and followed African and Arab children from the Bosquets quarter of Clichy Montfermeil on their trek into Paris.

The direct rail link and motorway that were promised when Ly’s parents, immigrants from Mali, settled in Montfermeil never materialised. Just 15km north of Paris, Montfermeil remained isolated by design, to prevent the banlieue invading Paris.

The camera lingers on the sullen face of Issa, a scrawny 12-year-old with matted hair. He is the descendent of Victor Hugo’s rebellious street urchin Gavroche in Les Misérables, the 1862 novel which Hugo partly wrote in Montfermeil. Victor Hugo, and the fact that Clichy Montfermeil was the epicentre of the 2005 riots, are the banlieue’s only claims to fame.

Issa wraps a tricolour around his shoulders. He and the throng from the banlieue momentarily take possession of Paris, with the Arc de Triomphe and the Eiffel Tower as backdrops. They feel French. His is a patriotic film about multicultural France, Ly insists.

The next day, a new plainclothes policeman joins the three-man team from the anti-crime brigade, La Bac, who patrol the streets of Montfermeil. The characters and events that follow are all based on true stories.

Chris, a white policeman known to locals as Pink Pig, bullies a schoolgirl smoking a joint at a bus stop. “I’m the law here,” he boasts. The newcomer, Ruiz, hates the nickname Pento, after a well-known hair grease, ascribed to him by Chris. Gwada, the third policeman, is of African or West Indian origin.

Pento, and the viewer, are introduced to robed, bearded “Frères Muz”, Islamists who have largely driven out drug traffickers. A wheeler dealer gang boss with The Mayor emblazoned on his T-shirt serves as an intermediary between the local community and the police. Bored kids, deprived of summer camp, rig a makeshift slide down a steep incline, and battle with water pistols in an inflatable pool.

A brightly painted van from an itinerant circus drives around, loudspeaker blazing. “The gypsy kings,” as Chris/Pink Pig calls them, saw a black child run away with their lion cub. If the feline is not returned, they swear they’ll make war on the banlieue.

Chris/Pink Pig trawls through social media on his phone. “These idiots post everything they do,” he says. He finds a photograph of Issa cuddling the lion cub. Earlier in the day, Issa was cowering in the police station, where his enraged father brought him for stealing chickens from a Romanian, apparently to feed the baby lion.

The events that follow – spoiler alert – are sad and funny, fast-moving and suspenseful. Issa is shot in the face with a rubber bullet. The police are bundling the unconscious child into the patrol car when they realise they’re being filmed by a drone. They know they face punishment if the video gets out.

The drone belongs to Beuz, a geeky African boy with over-sized eyeglasses who spends his summer filming Montfermeil from a rooftop. He is Ly’s alter ego, the eye of the banlieue, played by Ly’s son.

Ly, now 39, bought his first video camera at age 17 and turned it into a weapon, following police around Montfermeil. In 2008, he posted a video of La Bac beating a manacled child on YouTube. Two policemen were suspended.

Retrieving the incriminating video before it goes online and sparks an explosion takes priority over driving the wounded child to hospital.

In the closing, violent frenzy, the street urchins of Montfermeil ambush the police in a graffiti-covered stairwell. Issa reappears, his deformed face a solemn African mask. Ladj Ly suspends action on the verge of the irreparable. There’s just the tiniest hope left, he seems to be saying. But watch out.

Les Misérables won the Prix du Jury at Cannes last May. It has been selected to represent France in the best foreign film category in the 2020 Oscars.

When Les Misérables was released to wide acclaim last week, Ly described it as a cry of warning. “The [immigrant banlieue] neighbourhoods are in trouble,” the director appealed to president Emmanuel Macron at Cannes.

“France is in trouble. Watch the end. Hear us, Mr President.”