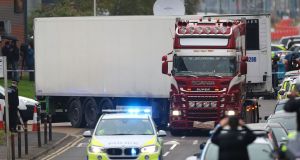 Container lorry in which 39 people were found dead inside as is it driven away by police from Waterglade Industrial Park in Grays, Essex. Photograph: Aaron Chown/PA Wire

A man from Northern Ireland has appeared in court charged with human trafficking offences after the bodies of 39 migrants were found in a refrigerated lorry container in Essex.

Lorry driver Christopher Kennedy (23) was arrested in the early hours of Friday morning on the M40 in Beaconsfield, Buckinghamshire.

The defendant, from Darkley, Co Armagh appeared before Chelmsford Magistrates’ Court charged with conspiracy to commit a human trafficking offence.

It is alleged that he conspired to arrange or facilitate the travel of other people with a view to exploitation.

He is also charged with conspiring to facilitate the commission of a breach of UK immigration law.

It is alleged that he did this between May 12th, 2018 and October 24th this year at Purfleet in Essex.

Mr Kennedy was not asked for pleas during Monday’s hearing.

He spoke only to give his name, age, address and to state his nationality as British.

He was remanded in custody to appear before the Old Bailey on December 13th.

Ten teenagers, including two 15-year-old boys, were among the bodies of 39 Vietnamese nationals who were discovered in the trailer in the early hours of October 23rd.

Emergency services were called to an industrial estate in Grays, Essex shortly after the lorry arrived on a ferry from Zeebrugge in Belgium.–PA