France and Germany in show of unity on migrant crisis 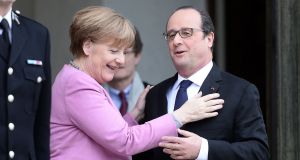 “France and Germany are working in the same spirit, with the same will,” Mr Hollande said, promising that France will respect “all its commitments”, including a pledge to receive 30,000 refugees from Iraq and Syria.

Germany has received hundreds of thousands of migrants over the past year, while France has officially accepted fewer than 300.

Franco-German co-operation was tested by prime minister Manuel Valls’s criticism of Mrs Merkel’s generosity to migrants. Speaking at the Munich security conference three weeks ago, Mr Valls said Germany’s policy was “untenable in the long term” and that Europe “cannot welcome all the migrants coming from Syria, Iraq or Africa.”

Mr Valls also opposed a permanent mechanism advocated by Mrs Merkel to distribute migrants more fairly throughout the EU. The German government responded that “Mr Valls is not the interlocutor of Angela Merkel”. Mr Hollande yesterday attempted to smooth things over.

Paris and Berlin, the “engine” of Europe, were at odds in the Greek debt crisis when Mr Hollande allied himself with prime minister Alexis Tsipras, and Mrs Merkel maintained a hard line. Now that Greece is having to cope with 32,000 migrants, Mrs Merkel says the EU cannot let Greece “plunge into crisis”. Brussels this week offered Athens €700,000 in humanitarian aid.

Both leaders emphasised that Turkey must fulfil the commitments it made last November, in exchange for €3 billion in EU aid and the speeding up of negotiations on Turkish accession to the EU.

Europe wants Turkey to control its borders and access to Greece, and to take back migrants who reach Europe through Turkey.

Alluding to the go-it-alone approach of some EU countries to the migrant crisis, Mrs Merkel spoke for herself and Mr Hollande when she said, “Together, we are convinced that unilateral solutions will not help us” because they “don’t lead to a reduction in the number of refugees.”

Mr Hollande announced he will send a French ship to the Aegean Sea to help Nato patrol the waterway between Turkey and Greece. Mrs Merkel said she was “very pleased” about the deployment of the French ship.

In a move supported by their British and Italian counterparts, the leaders asked Russian president Vladimir Putin to put pressure on President Bashar al-Assad to respect the ceasefire in Syria.

France’s migrant crisis continues in Calais, where a dozen Iranians have sewn their mouths shut and are on hunger strike in protest at the destruction of part of the camp known as the Jungle. The prefecture of Calais said nearly one quarter of the 7.5-hectare area was cleared this week.