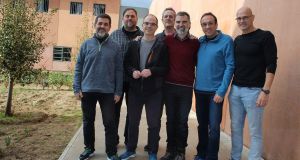 Four of the Catalan leaders facing trial over last year’s failed push for regional independence have gone on a hunger strike, claiming they are being treated unfairly by the Spanish justice system.

On Saturday, Jordi Sànchez, the former head of the powerful grassroots group Catalan National Assembly, and Jordi Turull, a former Catalan government spokesman, announced that they were embarking on the strike at Lledoners prison.

The pair accuse Spain’s constitutional court of deliberately blocking their numerous appeals to prevent their cases progressing to the European Court of Human Rights.

“We ask for an impartial and diligent constitutional court, which should not impede the exercise of our rights,” they said in a statement. “We do not ask the constitutional court for any special treatment. But we do not passively accept any discrimination or unwarranted procrastination.”

Spain’s prime minister, Pedro Sánchez, said that while the hunger strike “was obviously not good news”, the imprisoned leaders were being treated in accordance with the law.

“I think it is important to stress that they will have a fair trial because we live in a society based on the rule of law and the judiciary is independent,” he said over the weekend.

However the Catalan president, Quim Torra, has described the Spanish judicial system’s treatment of the prisoners as “one of the worst outrages seen in Europe” in recent years.

“This dramatic and drastic measure being taken is because of what we find to be the complete violation of citizens’ rights, civil and political rights, and of respect for the legal processes of the Spanish state itself,” he said.

“It’s my view that penal law is being used for vengeance, establishing a makeshift legality in order to attack political dissidence.

Jordi Sànchez and Jordi Cuixart, the head of the Omnium cultural group, have been in pre-trial detention since October 2017, while the former Catalan vice-president, Oriol Junqueras, has been in custody for more than a year.

The former Catalan president Carles Puigdemont, who led efforts to secede from Spain, fled the country and is now in Belgium.

At the beginning of November, the attorney general of Spain’s supreme court charged Junqueras and eight ministers and senior officials with rebellion, demanding a 25-year sentence for the former vice-president and up to 17 years for the others.

Tensions in Catalonia are likely to rise again early next year when the trials begin. – Guardian