EU trade pact with Ukraine from next year to go ahead 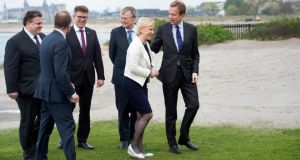 The European Union will implement a free-trade pact with Ukraine from next year despite Russian pressure for another delay, according to a draft statement prepared for a summit with six of the bloc’s eastern neighbours this month in Riga.

The joint declaration, likely to antagonise Moscow, commits to the deal from January 1st, 2016, a date already a year later than planned as Russia seeks to oppose European efforts to integrate Ukraine and move it out of Moscow’s sphere of orbit.

Russia is pushing for the deal to be postponed by at least another year, according to a Ukrainian official, but the EU is insisting there can be no further delay.

Although the EU is willing to discuss Russian concerns, implementation “will be a top priority of the EU and the partners concerned for the coming years”, the draft said.

But aside from the EU’s show of support for Ukraine, the May 21st-22nd Eastern Partnership summit will offer little for Armenia, Azerbaijan, Belarus, Georgia and Moldova, according to the draft, as EU governments lower their ambitions for fear of further provoking the Kremlin.– (Reuters)