Paris Letter: Sweeping restrictions take effect but public come out in legions to bask in sun 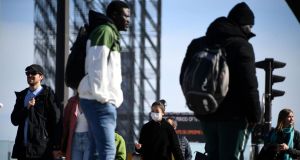 The French capital seemed torn between conflicting instincts of pleasure and self-preservation on Sunday, after the government shut down all cafes, restaurants, bars and non-essential shops in the hope of slowing the coronavirus epidemic.

By Sunday, 5,423 people have contracted the virus, of whom at least 300 are in critical condition. Casualties more than doubled in 72 hours, bringing the death toll to 127.

Yet thousands of Parisians ignored prime minister Edouard Philippe’s plea to practise “social distancing”. On the day that France was supposed to commence its unseasonal hibernation, they came out in legions to bask in the spring sunshine.

Families with young children, teenagers and joggers congregated in the Bois de Bologne. On the Champs de Mars, beneath the Eiffel Tower, pétanques players stood in clusters, slapping each other on the back.

Parisians window-shopped in Saint-Germain des Prés, where summer fashions seemed all the more alluring because boutiques will be closed for the foreseeable future.

The government made exceptions for grocery stores, pharmacies, petrol stations, banks and media outlets. But my newspaper stand is shut, with a notice saying “closed until further notice”. Pharmacies post notices saying “No masques. No (disinfectant) gel.”

Chairs are stacked high against the windows of the Flore and Deux Magots, Paris’s most famous cafes. There are almost no passengers in city buses, due to fear of contagion.

Philippe scolded the unruly French in his Saturday night announcement. “The first measures taken to limit gatherings have been imperfectly applied. I say it with all seriousness: Together we must show more discipline in implementing these measures.”

After the Bataclan massacres in 2016, Parisians showed similar bravado, drinking on cafe terraces so as not to give Isis the satisfaction of cramping their lifestyle. President Emmanuel Macron says the Covid-19 epidemic is only beginning. The seriousness of the catastrophe has not sunk in yet.

Places of worship are to remain open, but services and ceremonies are to be curtailed. Several friends spent Saturday planning the funeral of a colleague who died last week from brain cancer. The funeral, which was to have taken place on March 19th, will have to be postponed.

One by one, I have crossed out every appointment in my diary. A briefing on the upcoming EU Council. Several press openings for museum exhibitions. My building’s annual general meeting. The physiotherapist who was treating me for back pain sent a text to all his patients: “It is my responsibility, as a therapist, not to unwittingly become a link in the chain of transmission of this contagion.”

Despite the veneer of nonchalance, the French are hoarding. “There is no risk of shortages of essential products,” finance minister Bruno LeMaire insisted on Sunday, begging citizens “not to buy more than they need”. There is no pasta, rice, lentils or eggs at my local supermarket, where cashiers wear disposable plastic gloves.

In some ways, the epidemic feels like covering a war. I’ve stocked up in recent days, as I did in Baghdad before the 2003 bombardment. One tries to assess the risk before each outside engagement. If you’re lucky enough to possess a surgical mask, you wear it, and gloves, when going out, instead of a flak jacket and helmet.

In Beirut in the 1980s, you never knew who might betray you to kidnappers. In Paris 2020, you’re aware that close friends and neighbours could unwittingly give you the virus. I cringed when a friend sneezed on arriving for Sunday brunch. It was only hay-fever, she promised.

Macron wanted to cancel the first round of nationwide municipal elections on Sunday. Denial of democracy; a political ploy because his party was losing, the opposition screamed.

When the widespread shutdown was announced on Saturday night, the opposition flip-flopped and demanded cancellation. So did a group of public health experts and medical personnel.