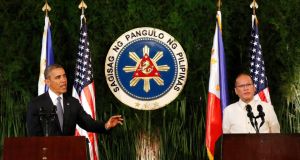 China’s foreign ministry on Monday restated its opposition to placing sanctions on Russia over the crisis in Ukraine, after leaders of the Group of Seven (G7) major economies agreed to swiftly impose further punitive measures.

Ministry spokesman Qin Gang said China had “maintained communication” with all sides since the outset of the Ukraine crisis, including the G7 countries, and explained its position.

“On the issue of international relations, China has consistently opposed threatening or imposing sanctions. We believe that sanctions are not conducive to an issue’s resolution, and may worsen tensions,” Mr Qin told a daily news briefing.

“We call on all sides to keep using dialogue and negotiation to appropriately resolve disagreements, to push for a political resolution to the Ukraine crisis. Sanctions are not in any party’s interests.”

US President Barack Obama, speaking in the Philippines, said Washington would announce new sanctions on Russia later in the day. He said the United States and its allies were keeping in reserve further measures against Moscow.

China has adopted a cautious response to the crisis, not wanting either to alienate key ally Russia or comment directly on the referendum in which Crimea voted overwhelmingly to join Russia, lest it set a precedent for its own restive regions, like Tibet.

But China has also said it would like to continue to develop “friendly cooperation” with Ukraine and that it respects the ex-Soviet state’s independence, sovereignty and territorial integrity.

China said in March, after Crimea’s parliament voted to join Russia, that sanctions were not the best way to resolve the situation.

Ukrainian President Viktor Yanukovich, since ousted after three months of sometimes violent protests, visited China in December in the hope of winning much-needed financial aid, but China did not say it would provide any loans.