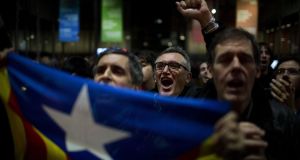 Pro-independence supporters celebrate the results of the informal poll for the independence of Catalonia in Barcelona, Spain, on Sunday.Photograph: AP Photo/Emilio Morenatti

One of the most enduring images from Sunday’s Catalan independence referendum was that of queuing voters gleefully applauding one of the event’s international observers as she entered a polling station in Barcelona.

The spontaneous gesture was entirely in keeping with the festive, informal atmosphere of a referendum which was, after all, unofficial and lacking a legal framework. But it also reflected how desperate many Catalans are for their long-standing grievances with the Spanish state to be taken seriously by neighbouring countries.

Leading up to Sunday, there were plenty of doubts about the vote’s credibility. Even one pro-independence voter resignedly told The Irish Times that it was a “decaffeinated” referendum.

That was because the Spanish government of Mariano Rajoy, deeming the planned vote illegal, had persuaded the constitutional court to announce its suspension. The decision of Catalan regional premier Artur Mas to defy the court and push ahead with the vote looked potentially reckless, especially if it failed to draw a substantial turnout.

The result itself, with 81 per cent voting “yes” to both questions (“Do you want Catalonia to be a state? If so, do you want that state to be independent?”) is not a true reflection of Catalan opinion, which most polls show to be fairly evenly split on independence. But with the vast majority of Catalans opposed to a break with Spain staying away on Sunday because of the referendum’s outlaw status, those answering “no” to the first question made up less than 5 per cent of votes.

So, if the referendum was not a serious barometer of public opinion, what was it?

Even Mas accepted it was not an electoral event with immediate consequences, but rather a symbolic occasion. “Catalonia has taken a giant step toward the aim of being able to decide, at some point, with full freedom and guarantees, the political future of our country,” he said.

He now has his sights set on what he calls a “definitive” referendum. By that he means either a Scotland-style vote agreed upon with the central government, which looks highly improbable, or the more likely prospect of early regional elections, treated as a plebiscite on the independence issue.

Such a plebiscite would require Catalonia’s secessionist parties to unite on a common electoral ticket. At the moment, that plan is complicated by Mas’s uneasy relationship with the leader of the powerful Catalan Republican Left (ERC), Oriol Junqueras.

But for now, the referendum’s success has given its figurehead, Mas, the political upper hand over the restless Junqueras. The regional premier has said that this week he will appeal to the prime minister to consider his “definitive referendum” proposal and other related issues. However, the cautious Rajoy is under pressure from the political right not to cede an inch.

Justice minister Rafael Catalá summed up the central government’s stance when he dismissed the referendum as “an act of propaganda that has no validity”. But propaganda or not, even the Spanish government cannot ignore the fact that this was the fifth massive mobilisation pro-independence Catalans have staged since 2010.

With his Popular Party mired in corruption scandals and its popularity nose-diving ahead of municipal and general elections next year, the Catalan problem adds to the feeling that Rajoy is under siege.

Columnist María Dolores García observed that the prime minister’s legalistic approach to Spain’s territorial crisis has inadvertently fuelled Catalan separatist feeling. “In the wake of November 9th,” she wrote in La Vanguardia newspaper, “we will have to see if that continues to be the case or if Rajoy can surprise us”.