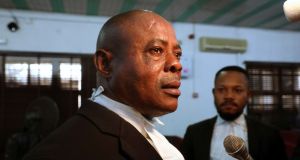 Forty-seven Nigerian men have pleaded innocent to homosexuality in a court hearing in Lagos, one year after they were arrested.

The men face a possible 10-year prison sentence for displaying affection with members of the same sex in public, under a strengthened anti-gay law that came into force in Nigeria in 2014.

The defendants were among 57 people arrested in a hotel during a police raid in Lagos last year. They said they were guests at a birthday party, but police said they were being “initiated” into a gay club, according to Reuters.

Though LGBT people are sometimes arrested in Nigeria, it is rare for a case to reach court, according to Seun Bakare, Amnesty International’s Nigeria programmes manager.

“There is no doubt that there has been a wider crackdown on LGBT people in Nigeria, since at least the promulgation of the Same Sex Prohibition Act in 2014,” Mr Bakare told The Irish Times in an email. “But the crackdown often takes the form of indiscriminate arrests and extortion before arrested persons can be released. Most of the cases of people arrested never end in court, hence, we could say this arraignment is rare.”

“Police officers will stop you and then get you arrested, extort money from you and begin to call you names,” one of the defendants, Smart Joel (25), told Reuters on Wednesday. “I just wish the case will be quickly dismissed as soon as possible.”

Mr Bakare called for civil society organisations to scale up their advocacy and ensure “these ridiculous charges against these men be dropped”, though he said there may already have been consequences for the men because of the arrests.

“It is too early to say what the impact of the prosecution is on these men, but it is clear that given that Nigeria is a country where discrimination against LGBT people is rife, these prosecutions have further tendency to cast these men in bad light in the eyes of the public. The resultant effect is continuing discrimination,” he said.

More than half of Africa’s 54 countries have laws against homosexuality, according to Human Rights Watch, though some are being challenged. Earlier this year, Botswana’s high court overturned anti-gay laws. Weeks before, a Kenyan court upheld similar laws, in a blow for LGBT people in east Africa, some of whom told The Irish Times they would move to Kenya if homosexuality was decriminalised.

There has also recently been a crackdown on LGBT people in Uganda. Earlier this month, Ugandan police raided a health meeting in the capital city, Kampala. They arrested 120 people on suspicion of using narcotics, though activists said the raid was deliberately carried out to intimidate the LGBT community.

In October, 16 LGBT activists with community-based organisation Let’s Walk Uganda were also arrested and charged with “carnal knowledge against the order of nature”, according to Human Rights Watch.