President of Kosovo Hashim Thaci was giving a press conference during his visit to Albania in the town of Thumanë when the ground began to shake due to an earthquake aftershock. Video: Euronews 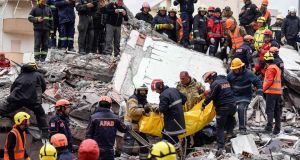 Rescue teams and firefighters carry a victim found under the rubble of a collapsed building in the town of Durres, western Albania on Thursday after the strongest earthquake in decades hit the country. Photograph: Armend Nimani/AFP via Getty Images

Hope is fading in Albania of finding more survivors following an earthquake that killed at least 41 people, injured almost 700 and made thousands homeless.

In the area hit hardest before dawn on Tuesday by the 6.4 magnitude quake, emergency crews have halted their search for survivors in the town of Thumane but continued on Thursday to dig through the rubble for people unaccounted for in the Adriatic port of Durres.

“Forty-eight people have been found alive so far, but in the past 24 hours the number of dead has risen while the number of survivors has stayed the same. We think less than a dozen people are still in the rubble, according to reports of who is missing,” said Endri Fuga, chief spokesman for Albanian prime minister Edi Rama.

“The problem is that after the main hit there have been aftershocks that are also quite heavy. We just had one now of magnitude 4.8 or 4.9, so the rubble keeps moving and is not safe,” he told The Irish Times by telephone as he and Mr Rama travelled from the stricken area to the capital Tirana, about 35km away.

Mr Fuga said about 690 people had sought medical attention after the quake, which was the biggest to strike the Balkan state in 40 years, and about 30 were still in hospital in Albania and one had been flown to Italy for treatment.

Thousands of Albanian police, soldiers and emergency workers scrambled on Tuesday to rescue people from the ruins and set up tents and provide food for those whose homes were damaged or destroyed. Local hotels are also taking in people affected by the disaster.

“Many, many houses will need to be rebuilt,” said Mr Fuga.

“We are in the midst of an assessment now but we can say that in the Tirana and Durres regions the damage is really quite large. We are talking about hundreds of families or maybe more [without homes], so that means thousands of people.”

Albanian emergency services and volunteers have been helped by crews that arrived swiftly from countries across the Balkans and beyond, bringing rescue skills and equipment to one of Europe’s poorest states.

“The solidarity has been great,” said Mr Fuga, while identifying two key areas in which Albania now needs foreign help: funding for reconstruction and expertise in assessing the safety of buildings shaken but left standing by the quake.

While hailing the way in which many Albanians and other states responded to the disaster, Mr Rama lambasted some domestic media for spreading misleading stories about the aftermath of the quake and predicting future big tremors.

“Because of all the aftershocks people are very sensitive,” said Mr Fuga, “and when they also fuel it with this sort of fake news it’s really bad”.