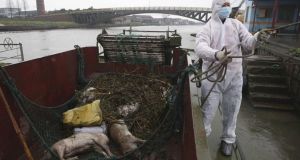 A worker in protective clothing prepares to haul away dead pigs pulled from a river along Zhonglian village of Jinshan district in Shanghai. The number of dead pigs found in the Shanghai river that provides drinking water to the Chinese financial hub has risen to almost 15,000. Photograph: AP


Nearly two weeks after officials began pulling pig carcasses out of the Huangpu, the number of hogs discovered floating in the river, which supplies one-fifth of Shanghai ’s drinking water, and in nearby waterways, is closing in on 15,000.

How they got there and why they were dumped remain the myster ies at the heart of what some are calling the “hog wash scandal”. Two-thirds of them are piglets.

The Shanghai Information Office insists there is no need to panic, and that the food supply is safe. Local farmers have been told to properly dispose of dead animals.

The chief vet for China ’s agriculture ministry, Yu Kangzhen, found no evidence of a swine epidemic, but said some samples tested positive for common porcine circovirus and a diarrhoea virus.

Cold weather and fluctuating temperatures have caused a spike in deaths among piglets, the vet said. Others have speculated that there may have been a chemical spill somewhere along the river.

When pigs die of disease, local hog farmers often dump the carcasses into rivers or on rural roads.


Water quality ‘normal’
Nearly 10,000 have come from the Huangpu River, and the remainder from waterways in Jiaxing.

Officials insist the river meets “normal” national water quality standards, and that no meat from the affected animals has ended up in the markets.

Many of the pigs are believed to come from the city of Jiaxing, in Zhejiang Province, one of the largest pig-breeding bases in the Yangtze River Delta .

Pig sales account for as much as 80 per cent of local farmers’ incomes, the South China Morning Post reported.

“Our village has assigned someone to collect and dispose of dead pigs,” a resident of Yongfeng village in Xinfeng town told the paper. The resident called pig carcass collector Gu Jinlin to pick up the bodies of two suckling pigs last week.

“But I know that some villagers will just throw the dead pigs in the waste yard because they think calling Gu and waiting for him to arrive is time-consuming. Some other villagers, whose houses are on the banks of rivers, will dump the carcasses into the water and they think that’s convenient.”

Shanghai government spokesman Xu Wei said boats had been sent across the border between Shanghai and Zhejiang Province to prevent more dead pigs from floating down the river. Any carcasses found have been incinerated .

The fact the scare involves pork strikes a nerve in China, where meat from the pig is a staple.