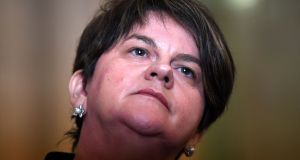 Arlene Foster: “There were solutions out there but unfortunately that was not the attitude that came from either the Irish Government or the European Union.” Photograph: Clodagh Kilcoyne/Reuters

DUP leader Arlene Foster has accused the Irish Government of being the aggressor in the Brexit negotiations while warning there would be “consequences” if Theresa May pressed ahead with a deal that threatened Northern Ireland’s union with Britain.

Ms Foster, speaking at Westminster on Wednesday evening, appeared unimpressed with Taoiseach Leo Varadkar’s comment that he recognised that “for the unionist community this is quite a difficult time”.

Mr Varadkar reasserted in the Dáil on Wednesday that the Government respected the “territorial integrity of the UK and the principle of consent” of the Belfast Agreement.

Ms Foster, ahead of a meeting with the UK prime minister, said what was frustrating was that there were solutions to the Irish Border issue that did not necessitate the current political difficulties.

“We will not be led by anyone else. That has always been our position, and we certainly will not be led by the Irish Government, who have sought throughout to be the aggressive people in the process, and not looking for a solution,” she said.

“There were solutions out there but unfortunately that was not the attitude that came from either the Irish Government or the European Union either,” she added.

Before getting sight of the draft deal, Ms Foster said that “on the narrative that has come out from the prime minister, it certainly does not seem that we could support it because it breaches the red line in terms of having differences between Northern Ireland and the rest of the United Kingdom”.

She said that in the meantime the agreement for the DUP to prop up Mrs May’s Tory government remained in place. She would not say whether she would seek to bring down the government and possibly usher in a Jeremy Corbyn-led Labour government. But she warned there would be consequences if the deal threatened the union.

“Of course there will be consequences. We could not as unionists support a deal that broke up the United Kingdom, ” said Ms Foster.

SDLP leader Colum Eastwood called on Ms Foster and the DUP “to cut the hysteria and act on behalf of the people of Northern Ireland”.

“The reaction to a reported Brexit deal by the DUP is both flippant and irrational. I would remind Arlene Foster that her first priority is to defend political stability and the economic future of our people here,” he said.

The Ulster Unionist Party’s Steve Aiken said unionists had real concerns about any proposals that would undermine “Northern Ireland’s political integrity with the rest of the United Kingdom”.

“We don’t want to be any different from the rest of the United Kingdom. We want to see a good agreement post Brexit that works for everybody. We want to see everybody in a plus, plus situation if we can,” he added.

Steven Agnew of the Greens said the backstop was crucial in “lessening the impact of Brexit on Northern Ireland businesses and the wider economy”.

He added: “Overall, however, Brexit is not in the best interests of the people of the United Kingdom or Northern Ireland in particular. That’s why an informed and rational analysis of any Brexit deal and a People’s Vote is the only way forward.”

Agriculture minister accused of engaging in ‘scaremongering on steroids’