China sees 14% rise in people living with HIV and Aids

The number of cases rises sharply this year to 820,000 people 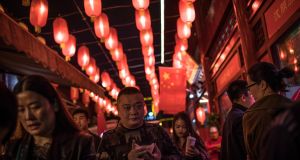 About 80.4 per cent of HIV/Aids patients in China had received anti-virus treatment as of the end of last year. Photograph: EPA/Roman Pilipey

The number of people living with HIV and Aids in China has jumped by 14 per cent this year, health authorities reported, with more than 820,000 people affected in the country, health officials say. More than 40,000 new cases were reported in the second quarter of this year alone.

The overwhelming majority – more than 93 per cent – were transmitted through sex, health officials told a national conference on HIV/Aids in Kunming, capital of southwest China’s Yunnan province. Previously, most transmissions had been through blood transfusions, but this had been reduced to almost zero, the conference was told.

On a year-on-year basis, the number of those living with HIV and Aids in China has risen by 100,000 people.

Wang Bin, an official at the National Health Commission, said about 80.4 per cent of HIV/Aids patients in China had received anti-virus treatment as of the end of last year, the Xinhua news agency reported.

A report from the conference in the Global Times newspaper said that there were 11,321 foreigners with HIV/Aids in Yunnan province, more than half of the national total for foreigners with the disease.

Jia Manhong at the Yunnan Centre for Disease Control and Prevention (CDC) said that 80 per cent of that number came from Myanmar and had contracted HIV mainly through sex.

She said many had entered the country illegally into the border city of Ruili.

Yunnan has a long border with Myanmar, Vietnam and Laos and is close to the Golden Triangle drug-producing area and many women cross the border illegally and end up working as sex workers in the border towns.

The data also showed that most of those infected with HIV in the 15-24 year-old category involved male college students aged 18-22 who engaged in same-sex activities.

Homosexuality was decriminalised in 1997 – previously it had been considered a mental illness – but social taboos and discrimination against LGBTI people remains, especially in smaller cities and rural China. Nearly all men who have sex with other men will eventually marry women to avoid angering their parents, and this leads to further transmission of the disease.

Since 2003, the government has pledged to give full access to free HIV medication, but in some areas, discrimination and stigmatisation means many people do not take advantage of the help available.